Chunky looks give the Trax a distinctive feel 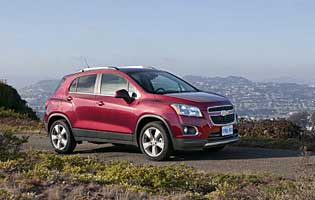 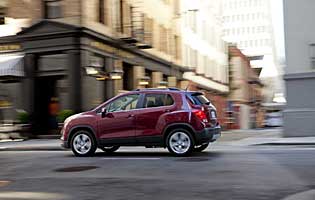 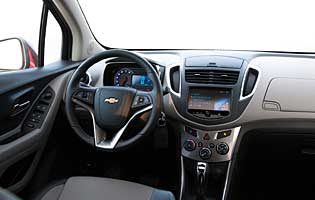 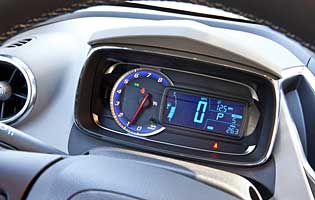 Chevrolet is going through a transformation in Europe as it renews its range and adds additional models to it to offer stronger competition to established rivals. Its latest model is the Trax which enters a new sector for the US-based manufacturer, competing with smaller SUVs and crossovers.

The concept of crossover revolves around offering buyers a hybrid of two or more different vehicle types in order to meet their specific demands, and at present it is the hatchback-SUV crossover that seems to be finding most favour. It blends the looks, height and driving position of an SUV with the dynamics and running costs of a car, potentially with or without four-wheel drive and it is this template that the Trax follows.

Similar in size to the Cruze hatchback, the Trax fits comfortably into the compact template and is considerably smaller than any traditional SUV. It has all the typical SUV styling cues however, with chunky proportions and plenty of plastic body-cladding in line with its off-road pretentions. It does have the capability of going off-road however: although two wheel drive versions are available most models offer all-wheel drive as standard.

The engine range consists of two petrol and one diesel, already seen elsewhere in the Chevrolet line up and the three gearboxes are dependent on engine choice. Although the Trax has a higher ride height than a standard hatchback the suspension is designed to prioritise on-road performance - the Trax does not suffer from any of the dynamic issues that full SUVs have been known for in the past.

With a strong focus on practicality, the Trax has been designed as a family vehicle. Offering seating for five, it also has eight possible seating combinations and plentiful storage within the cabin. The Trax also offers the sophisticated MyLink audio/navigation system which has downloadable apps giving plenty of scope for customisation.

Our verdict on the Chevrolet Trax 1.4 Turbo

An attractive-looking car in a rapidly expanding market sector, the Trax boasts a number of pleasing features. Its tall stance does much to make cabin access easy, while the car's on-road manners ensure the driving experience is pleasing if not terribly exciting.

With the 1.4-litre turbo fitted the Trax should be relatively economical to run as long as the driver exercises restraint. The diesel version offers the best financial returns although with a higher price tag as a result.

The Trax really makes the most of its compact footprint, packing in good interior space front and rear. There are some useful storage areas too, with a large bin between the front seats. The boot is well-shaped and at a good height also.

Despite being a value machine rather than premium the Trax offers quite an attractive cabin. The instrument display and surrounding controls are illuminated in a cool blue while the graphics are modern and attractive. The MyLink system is very intuitive and has the feel of a modern tablet device with its clarity and responses.

All Trax passengers can be seated in comfort, with only the rear centre seat being slightly compromised by the shape of the seat. Noise levels are kept in check reasonably well, although inevitably there is a little more noise in the diesel version. The ride comfort is better on the smaller wheels though perfectly acceptable when riding on 17-inch versions.

A standard fit alarm and immobiliser should keep the Trax secure, while the MyLink system is fully integrated into the car so there's no opportunity for removal. A well-fitted load cover will keep the boot's contents safe with a hidden compartment under the floor.

The Trax's crossover status means it has the dynamics of a car rather than an SUV which bodes well for avoiding accidents in the first place, helped by ESP as standard across the range. Should the worst happen it is equipped with six airbags as a minimum and a strong safety cell.

With the perky 1.4-litre turbocharged engine up front the Trax is a pleasing car to pilot. The steering is accurate but light, the six-speed manual gearbox shifts easily and the engine behaves like a bigger naturally aspirated engine rather than a turbocharged one, with a smooth and linear nature. Refinement is good at higher speeds and when pressed the Trax is stable and benign rather than exciting, but this is exactly as most buyers would wish it to be.

As a family vehicle the Trax has all the right ingredients, with a spacious cabin and flexible loadspace. Kids will enjoy the better view out that the high ride height affords and won't be too closely squeezed together. The cabin trim looks sufficiently sturdy too and with the option of leather seats it should cope with whatever little ones can throw at it.

The Trax would make a perfectly acceptable first car as it is very undemanding and offers better than average visibility. It is a little more expensive than the usual first-car fodder but barring that it presents no issues for an inexperienced driver.

Chevrolet is still building its quality reputation and the Trax goes some way to helping that. At first glance the cabin looks of surprisingly high quality, with tasteful plastics and a mix of colours. Closer examination reveals some of the trim is less tactile than it appears, but overall quality is good. The Trax has the looks and a respected nameplate to help its image, and the fact that it is something new and different may tempt buyers new to the brand.

The Trax is a compact car but the high ride height makes it easy to get in to both the front and rear seats, bar a slightly higher sill to negotiate when getting into the rear. The boot is the same with a large hatch aperture, although the boot release is placed low down on the hatch rather than the instinctive position above the numberplate recess.

The Trax is one of the first Chevrolets to get the new MyLink system which uses a large touchscreen. Better still is that alongside the typical functionality it has the flexibility to download apps for a variety of uses, giving limitless possibilities and giving the Trax a real advantage over rivals.

The Trax has the typical chunky looks of an SUV with substantial protection mouldings around the sills and big bumpers to match. As a result brighter colours look better as they balance the grey below, and the optional 17-inch wheels are best chosen as it can look a little weedy on the standard 15-inch items. Inside there are a mix of shades that help to lighten the cabin while the blue illumination looks a little different and boosts the quality appearance.

The high driving position, good visibility and light steering make short work of parking. An audible parking sensor system is also available, and with a modest overall length the Trax is easy to squeeze into small spaces.

Skoda Yeti Unusual but very effective crossover, good on and off road

Suzuki Vitara More of a proper off-roader than a crossover