Station Wagon fits well with the rest of the Lacetti family 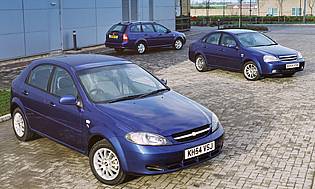 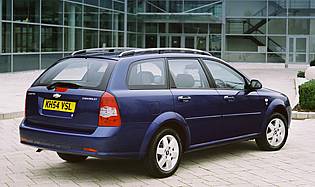 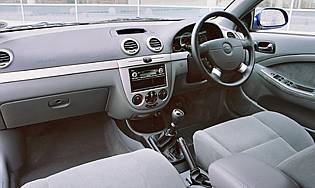 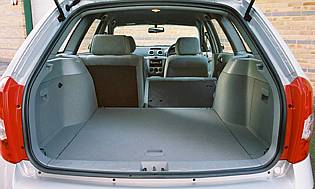 The people carrier concept is not for everyone. Granted the extra layer of flexibility is a bonus, but the various compromises include handling characteristics that can't match that of conventional cars and a surplus of seats when what you might want is straightforward loadspace. The compact estate, although not half as fashionable, is probably a better solution. Chevrolet's solution boasts good levels of equipment, a reasonable amount of space, and a modest price tag. It even looks good, too.

For people who don't subscribe to the MPV way of life, there's always an estate car. If you don't have children or the need to transport people around on a regular basis, too many seats can be more of a hindrance than a help. Also, a surplus of seats can mean compromising the car's load carrying potential.

With that in mind, the traditional estate car has much to offer, despite not always being the height of fashion in the eyes of some buyers. The compact estate is probably the most ignored of all the different classes, but the advantage over small people carriers and family hatches should not be dismissed.

Taking it a step further, if the prospect of paying top dollar for a car from the likes of Ford doesn't appeal then there's always product from the likes of Chevrolet, Mitsubishi and Skoda. The former is interesting not only because Chevrolet is a relatively young brand outside of North America but also due to the car - a Lacetti Wagon in this case - being something of a surprise.

Think budget and thoughts of poor quality fittings, sparse equipment levels and bland design spring to mind. Not so with the Lacetti; it's refined, well equipped and not at all bland. The overriding impression is of a car that under promises but over delivers in spades, making the ownership experience that bit more enjoyable.

Our verdict on the Chevrolet Lacetti 1.6 SX, Station Wagon

Chevrolet's Lacetti Wagon offers a distinctive and different alternative to small people carrier. For some buyers who need more space than what a conventional hatch can deliver but want to retain car-like handling, the compact estate fits the bill. The Lacetti's low price and decent equipment levels should help swing the decision if value for money is a priority.

The combination of a low asking price and insurance costs plus modest fuel consumption should make the Lacetti Station Wagon a relatively painless ownership proposition. The car's mechanicals have proven to be robust in other applications - including the 'old' Daewoo models - making unscheduled and costly visits to the garage unlikely.

It's no MPV but the Lacetti Wagon offers a decent amount of room for its compact size. With the rear seats in the upright position the loadspace available totals 400 litres and 1,410 with the seats down. The rear seats split 60/40, but they don't fold completely flat. Up front there are a number of handy storage areas, including a slide-out tray under the front passenger seat and a usefully deep centre armrest cubby. Space-wise the car will accommodate four adults in reasonable comfort. Rear legroom is fine, while front occupants should never feel cramped.

The Lacetti isn't a complicated car and its modest number of controls only serves to highlight this. The car's main dials are large and clear, while the centre console controls are easy to use. The only complaint here is that the design of the various controls lacks any real flair - something that gives the likes of a Focus and Astra an edge. Also, while effective, the Lacetti's column stalks look very old fashioned.

Low-cost cars such as the Lacetti can't match the super-refined cars from the likes of Ford and Vauxhall, but this Chevrolet comes mighty close. At sensible speeds, tyre, wind and engine noise are all pleasingly low. It's only when you push the car that the levels rise noticeably. The cabin, while conservatively styled, boasts surprisingly comfortable seats. Head, leg and elbow room is more than adequate, and rear seat passengers will rarely feel cramped.

It would be foolish to expect too much of a car at this price point, and so it is that you only get an engine immobiliser with the Lacetti Wagon. That said, you do get remote central locking plus a sturdy, retractable cover for the load bay. An added bonus is the small but useful oddment tray under the front passenger seat. As the stereo unit is of the non-standard variety, the unit's front section can be removed as an extra deterrent.

Despite living at the budget end of the market the Lacetti Wagon comes with a good level of standard safety kit for its asking price. Four airbags - twin front and side - make up the bulk of the provision. Front seat belts get the obligatory pretensioners, while Isofix child seat mounting points are present in the back seats. Active safety comes in the form of anti-lock brakes.

As a car pitched more to appeal to people on small budgets, the Lacetti Station Wagon is a pleasant and neutral steer. The car's steering boasts plenty of assistance but the overall feel is weightier than some of its rivals. The gearshift is a slick affair and belies the Lacetti's budget origins. Overall, and driven within sensible limits, the car never feels out of its depth and is largely vice-free. The solitary 1.6 petrol option only feels out of its depth when pushed hard. More power would be nice, but it's unlikely to be an issue for most buyers.

For someone with a small family the Lacetti Station Wagon makes a lot of sense. It can't match a compact MPV for versatility, but it easily beats a conventional five-door hatch thanks to its more practical boot. That said, the car's compact dimensions will see it being outgrown as a family expands. But for a few years at least, the Lacetti can be regarded as a solid, low-cost solution.

Being affordable, practical, not too big and easy to drive, the Lacetti would be a reasonable choice for the novice driver. It might not be the height of fashion, but it won't cost the earth to run, either. Easy to manoeuvre around town, yet plenty fast enough for motorway runs, the Station Wagon is great if a traditional supermini would be too small.

For the asking price, the Lacetti is very well screwed together and, save for its predominantly grey colour scheme, the cabin gives little away as to the car's budget origins. Image, however is a different matter. Chevrolet, formerly Daewoo, lacks the brand equity enjoyed by the higher profile marques and, as such, the Lacetti won't be a car you lust after but one you buy because it makes financial sense.

Front seat occupants will have no problems getting in or out of the car; the doors open wide enough for most people and the seats are mounted high enough so that you don't have top drop down into them. At the back you don't quite get the same level of space but it's no hardship if you are of average height and build. The tailgate opens nice and high and the load lip is low enough to make loading and unloading a simple act.

Audio provision isn't quite up to the standards of the mainstream opposition but the Lacetti's sound system does a decent job nevertheless. The only gripe is the fact that its appearance doesn't quite match the rest of the fascia, giving it a less than premium look and feel. On the plus side, you do get steering wheel-mounted controls for the basic functions.

A nice, light metallic hue shows the Lacetti off the best. Not only does it help make the car stand out, it also makes it look more expensive. Inside and things aren't quite so glamorous. Varying shades of light grey plastic dominate the cabin. Coupled with the light grey seats this colour choice is a throwback to how budget cars used to be equipped and is a little disappointing.

Light power steering coupled with good visibility makes the Lacetti relatively easy to place in tight spaces. Although you don't get any assistance at the rear when parking the car, the good thing about the estate is that the tailgate goes straight down - making judging distances to obstacles relatively easy.

A conventional wheel is fitted as standard.

One engine option - 1.6-litre (110bhp) petrol unit. Standard fit is a five-speed manual gearbox, with the option of a four-speed auto unit. SX is the only trim level.

Vauxhall Astra Estate Like the Focus, the Astra is a better all-rounder but more expensive to boot