Stripped back Supersport doesn't even have a windscreen 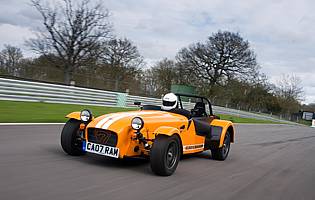 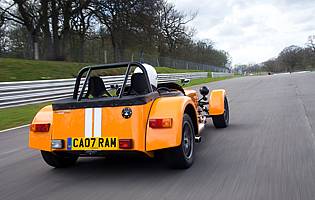 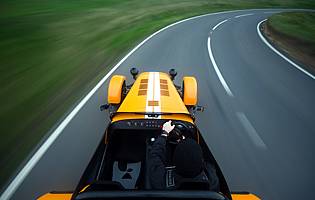 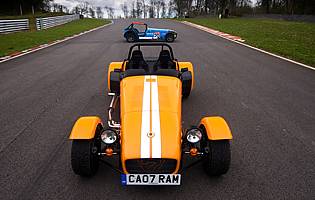 Another great British success story, Caterham has been honing and developing the basic Seven model for decades with each one suffused with spirited performance. This latest Supersport model aims to combine many of the chassis and suspension developments of the higher specification versions with the more manageable power output of the 1.6-litre Ford powerplant.

Despite the numerous iterations of Caterham Seven that have appeared over the years, the basic recipe remains the same. The Seven is made up of a lightweight spaceframe chassis with a minimum of bodywork draped over the top. The strict two-seater has the engine up front with drive to the wheels and is free from modern luxuries: items such as a heater are optional while the truly adventurous can choose to have an air deflector in place of a windscreen.

That stripped-back approach is a key to the Seven's appeal, making it possibly the lightest car on sale in the UK today. With the focus purely on driving pleasure and with few concessions to comfort or practicality, the Seven driver can savour the response of the steering, the rapid acceleration and the ability to change direction that can only be achieved with a car weighing so little.

The Supersport sits somewhere in the middle of the Seven pecking order, being more focused and intense than the Roadsport models but lacking the ultimate performance of the R300 models and above. However, what it does have is the sharpened suspension settings and powerful brakes borrowed from higher up the range. Alongside features such as a limited-slip differential, short-ratio gearing and four-point harnesses, the Supersport is ready for the track as well as enthusiastic road driving.

Despite the race-car looks the Supersport has a relatively modest 1.6-litre Ford engine, albeit one tuned by Caterham for this particular application. Despite a power output bettered by some ordinary family saloons, the fact that the Supersport weighs fractionally more than half a metric ton means it is capable of accelerative performance better than cars costing thousands more, and it is this ability that is key to its appeal.

Our verdict on the Caterham Seven Supersport

Clearly the Seven Supersport is a car designed with just one purpose in mind, and therefore is something that will only interest a minority of people. However, those who are looking for a superlative thrill will find just that. With the option to build it yourself plus numerous packages to increase comfort or save weight, the Supersport is yet another version of the Seven that offers unparalleled thrills.

Space is at a premium for driver and passenger in the Supersport. For those over 6ft tall, an SV model can be specified with a larger chassis at extra cost, but the standard version hugs the figure when inside. Room for the upper body is acceptable if the lone occupant; elbow room for vigorous driving is lacking if carrying a passenger. Legs are squeezed by the transmission tunnel and the footwell is tiny - chunky trainers will make working the pedals frustrating. A tiny boot is present - it will accept a couple of small bags alongside the roof and tonneau cover.

The dashboard contains only the essential gauges and equipment. A gear shift indicator is a useful addition and the rev-counter and speedometer are ideally positioned. Less so the fuel gauge, which is on the passenger side and can be difficult to read from the driver's seat. The push button indicators do not self cancel and are thankfully accompanied by a loud beep. The rest of the function such as wipers and lights are controlled using centrally mounted buttons. The steering wheel can be easily removed to aid access and the gear lever is perfectly positioned.

The Supersport is clearly not built with comfort in mind, but it is less racey than its R 400 and R 500 counterparts, making it easier to live with day-to-day. At open road speeds a full-face crash helmet is pretty much essential, and although this brings its own comfort issues it does add safety and reduce noise. The ride is very firm and bigger bumps taken a speed can be wince-inducing, but the seats are surprisingly comfortable considering their stripped back nature.

Given the lack of doors or a permanent roof, security is something of an issue. Even with the canvas covering in place, doors are only latched with poppers. Fortunately an engine immobiliser is standard. Keyless ignition requires the fob to be present for the starter button to engage. The removable steering wheel adds additional security, but the optional battery cut off switch may prove useful for security conscious.

Although the Supersport is a minimalist car, Caterham has included aluminium honeycomb sections to give crush space, while the superior visibility and incredible dynamics mean it has the ability to avoid potential accidents better than survive them. Strong four-point harnesses are fiddly but sensible. Electronic aids such as ABS or ESP are not present.

The Supersport offers the performance and handling of a racing car in a package that is tractable on the road. With such a light body, the modest 140bhp delivered progressively by the Ford Duratec engine is made to go a long way, offering acceleration that's on par with a powerful supercar. The driving position can leave you feeling a little vulnerable, but allows the driver to fully exploit the nimble handling and super-responsive chassis. The gear change is short and sharp and the brakes progressive. Traction through corners is impressive, but the powerful engine can easily spin the wheels, at which point drivers will appreciate the responsive and easily controlled chassis.

Children may well love the thrill of being driven in the Supersport, but parents will be hard pushed to find a vehicle less suitable for family duties. Only children old enough to not require a safety or booster seat would be able to sit alongside the driver.

Despite being designed to be more manageable than its more powerful siblings, the Caterham Supersport still requires a high degree of confidence and a reasonable amount of experience thanks to tremendous performance and its responsive nature. Less experienced drivers would mostly find it a frightening experience. Insurance costs would also likely rule out younger drivers.

The Supersport feels like a robust device from the driver's seat. This is not a car for those seeking luxury, and some of the interior controls may seem laughably outdated. But in a car like this it is the mechanical elements that are of greater importance, and these are all well-honed and well proven quality components. The Caterham's image is impeachable: a car this focused and honest tends to be revered by those who know it and respected even by those who have no idea what it is.

With no roof and token doors, initial access to the Supersport is easy, but the very low seating position and narrow footwells require passengers to slide down into the seats, making awkward even for smaller drivers. With the roof in place the steering wheel will have to be removed - a quick release function makes this simple - in order to get into the driver's seat.

The Supersport is not fitted with, or available with, any form of audio system.

Considering the focussed nature of the Caterham range the colour palette available is surprisingly varied, with an array of base, metallic and special paint schemes to choose from. Despite the model's limited bodywork it's quite susceptible to colour choice, so it's worth investigating the options. The Caterham demonstrator has a vivid orange with silver stripes colour scheme that looks fantastic in the flesh.

Because the Supersport does without a roof, there is essentially 360 degree visibility as well as being able to see the car's extremities and place its wheels very accurately. However, the standard four-point harness does make it difficult to turn around, more so if you are wearing a crash helmet, but more crucially the steering is very heavy at low speeds and the lock is poor.