The Caterham 270S is a good-looking car, despite compromises 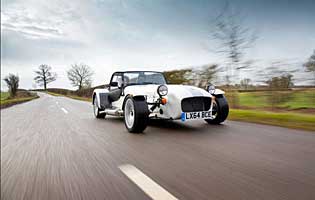 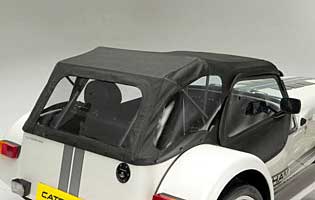 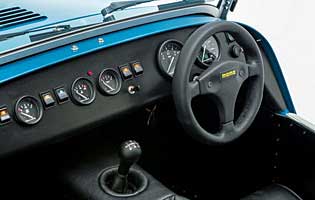 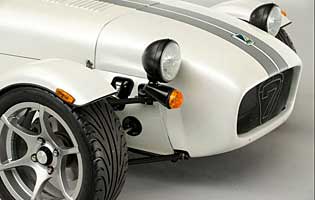 The Caterham range consists of six visually similar cars, progressing in lunacy from the back-to-basics 160, which has steel wheels, up to the high-performance 620R, which hits 60mph in less than three seconds and has a price tag of GBP50,000. The 270S SV is a popular compromise, combining affordability and ease-of-use with performance and driving pleasure.

The Caterham range is divided between R and S models. The R cars are 'race' orientated, with stiff suspension and extra-supportive seats. The S models are very slightly more mellow, with doors, padded chairs, an ordinary inertia-reel seatbelt instead of a harness, and mod-cons such as a heater.

The SV denotes the larger chassis. Here, Caterham has offered a bit of extra width and legroom, making the Caterham range accessible to those over 6' tall. This option adds just 25kg and barely affects the car's performance, making it an increasingly popular choice.

The open-top nature of the Caterham means that it will always be a second car. You can't lock the doors, there are very few safety features and the long nose makes it hard to navigate towns. The car is also incredibly low to the ground, which means you often hit large pebbles that you wouldn't have even noticed in a hatchback.

The six-speed manual is fantastic for acceleration, but the sixth gear doesn't offer a relaxed cruise on the motorway. And - like the old race cars it looks like - you'll have to be gentle with the 1.6-litre engine and warm it up for several minutes before you attempt to drive it anywhere.

Our verdict on the Caterham Seven 270S SV

The Caterham 270S SV is the easiest car to justify from the Caterham range. With creature comforts such as padded seats and a heater, this is one of the best compromises you can make if you want a high-performance driver's car but want to spend less than GBP30,000. It's not as 'pure' as the more hardcore Caterhams, but those aren't as enjoyable on a day-to-day basis. Pound-for-pound, you'll struggle to have more fun on UK roads.

There isn't much that can compete with a Caterham, but the 270S SV's price tag of around GBP26,000 puts it in line with cars from Zenos and Lotus. The car is cheap to run but would benefit from indoor storage space and, ultimately, some mechanical know-how.

There is space in the 'boot' for some small bags, alongside the two folding roofs that are stowed behind the passenger compartment. Access to this 'boot' is not lockable. There are no cupholders or any stowage compartments in the cabin, though you can have a 12v power supply.

The dashboard is incredibly simple. All the controls are laid out in a line, with the speedometer and rev counter partly obscured by the steering wheel. The indicators are controlled using a switch on the dash. Because the car is so simple, it all works quite well.

Though more comfortable than the R model, the S is still a bit of an abrasive car to drive or be a passenger in. You sit so low to the ground that the occasional scrape of a rock along the underside of the car is an unsettling experience, and the hard suspension is very unforgiving. The seats are soft enough and the warmth from the engine and gearbox keeps your legs warm.

There is an immobiliser with a fob attached to the key. The Caterham is impossible to lock, and the boot and roof are fastened using press studs. The petrol filler cap is manually lockable.

The excellent braking capacity is the best safety feature on the Caterham 270. There are no airbags, no assisted braking, no emergency brake assist, no traction control, and none of the driver aids that you can expect from most other cars. Because of how low you sit, dealing with junctions makes you feel very vulnerable in relation to larger vehicles.

The responsive, balanced setup of the 270 is stunning. There are few other cars on the road that offer the same level of engagement, with perfect steering, a hugely entertaining propensity to slide sideways, and a go-kart driving position. The S model is a compromise, with softer suspension and a more hospitable interior, and the SV model is another compromise on top of that. But the overall effect is a useable performance car that's cheap to buy and run. Most importantly, it's fun at low speeds too.

There is no reason to buy a Caterham as a family car. The lack of safety features, or even a real roof, makes it suitable primarily as a leisure vehicle.

This would be an inappropriate car for inexperienced drivers. The lack of traction control, airbags and ABS make it a challenging vehicle to regain control of if it starts to behave erratically, and the five-second 0-60 time is inappropriate for someone who's just passed their test.

The image of the Caterham is like nothing else. It turns heads wherever it goes, and attracts positive comments from people who aren't even enthusiasts. The materials used in the Caterham all feel very high-quality, albeit in a basic sense - the leather seats could never be described as upmarket, but they feel like they will last for years.

This is probably one of the most difficult cars to get in and out of. The black plastic flaps on the side are wind deflectors rather than doors, so getting into the seat on either side feels like stepping down into a very narrow bath. It's a snug fit and you need a certain amount of physical strength to exit the car, too.

There is no radio and no in-car entertainment. This is a driver's car, and because of how engaging - and challenging - it is to get the most out of, you don't miss the radio. A lack of sat-nav can be stressful in urban settings, but an aftermarket system could be mounted to the windscreen.

All Caterhams look good in garish colours, so it's no surprise that the paint options for the 270 are fairly varied. White is the most understated, though this gets muddy very quickly. Metal parts of the car, for example the exposed suspension, are generally black. The 'Caterham' decals down the side of the body accentuate the toy car aesthetic. Inside, the cabin is made from ordinary-looking but high-quality, hardwearing leather. Every part of the cabin is basic but functional.

The Caterham 270 has a colossal turning circle, making getting into spaces quite difficult without doing a three-point turn. Visibility to the rear is actually very good, partly because you're in the unique position of driving from the back of the car. Driving forwards out of parking spaces is tense because of how far you need to edge into traffic before seeing if the road is clear.

Ariel Nomad An even more silly road-legal toy, but with an off-road twist