On the road the Seven is a surprisingly agile performer 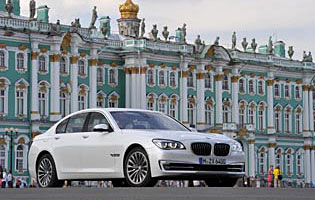 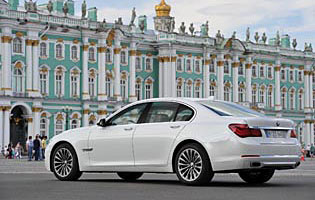 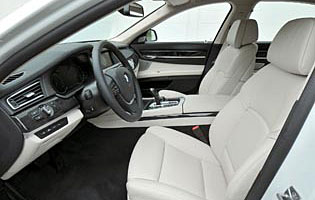 BMW's flagship 7 Series has experienced something of a roller coaster life. Recent years have seen dramatic design changes, which have done much to divide opinion. This version has had its looks toned down a little, and with the smaller cars in BMW line-up adopting a similar design policy it no longer stands out for the wrong reasons.

For this revised model the bulk of the changes have gone on under the skin, wit only light cosmetic alternations made to the car's lights and bumpers fore and aft. To counter criticism of the car's ride, BMW has made some major suspension changes to boost the car's ability to deal with poorly surfaced roads and add more ways for the driver to tailor the car's behaviour to the driver's taste.

Improved diesel and petrol engines highlight BMW's commitment to being both performance and eco champion in this class. There's more power but also improved fuel economy and CO2 emissions, which should please business drivers. The revision programme has also seen an increase in equipment levels, with a greater focus on infotainment and safety systems.

Some things never change, though: the list of optional kit is still longer than your arm and the i-Drive system, while much improved, still requires a little aclimatisation time for you to be fully at ease when on the move. There is an upside to to its inclusion though, as the car's cabin is refreshingly lacking in the sea of buttons you'll find in some rival offerings.

For all its wrinkles, BMW should be applauded for sticking with its trend-bucking motor. It may have become more conventional in recent years but it remains a slightly leftfield choice in a sea of ultra-conservative rival options. The Seven's subtly revised cabin seas new dials for the driver and a tweaking of some of the switchgear but the vast expanses of high grade plastics remain

Despite the improvements, BMW's 7 Series remains a car that you either love or loathe. If you like gadgets you'll like the Seven. Thankfully though its operation no longer depends on you being more than a little techno savvy. However, take the time to learn its quirks and the rewards are there for the taking. Potent in petrol guise and impressively frugal as a diesel, it remains a car that should be close to the top of your shopping list

While never a cheap car to own and run, the 7 Series is better than you think if you're smart enough to pick a diesel variant. The petrol models are great fun but difficult to justify in the face of high European fuel prices. Also, be prepared to study the options list as there are quite a few items that you could view as essential.

The good bits include plenty of room for front seat occupants and a comprehensive range of seat and steering wheel adjustments. The car's boot should prove plenty big enough for most excursions - even those to the golf club - while the front centre armrest doubles as a cavernous cubby. The only real gripe is the relatively modest amount of legroom in the back of a standard car - in contrast, the long wheelbase versions are much more accomodating.

The infamous i-Drive has been further improved, and is no more intuitive - and the colour screen is very good,. That said, once you've set up the car's basic functions you don't have to fiddle with it day-to-day. The basic ventilation controls are straightforward, although the bulk of the audio controls are accessed via the i-Drive. The big change is with the driver's instrument pack, which is electronic and changes apearance to reflect the various driving modes - cool tones for eco mode and a racy red appearance, complete with oversize numbers, for the sports mode. The former is fine but the latter can be a bit distracting.

The 7 Series and can waft along if you want it to, and the ride quality now comes much closer to that of a Lexus LS or jaguar XJ. That said, the Seven won't roll as much as the Lexus, ensuring occupants are better catered for on A-roads. Noise levels are very low, with only the engine making itself heard when pushed hard. The cabin is big enough to accommodate four large adults with relative ease, although the long-wheelbase car will do an even better job. Getting comfortable isn't difficult thanks to the supportive seats, although figuring out the various controls can take a while.

Standard fit on the Seven is remote central locking plus a comprehensive alarm system. The usual options - blinds and privacy glass - will help to shield you from the gaze of undesirable onlookers, while a keyless access and ignition option means you won't have to spend time fumbling for the remote fob on a dark night.

There's no shortage of safety kit in the Seven, with airbags aplenty and a raft of electronic aids to keep you safe such as radar cruise control, lane departure wearning. High power intelligent headlights also feature, along with the usual inclusion of Isofic child seat mounting points

BMWs have always been pitched as sporting vehicles and the 7 Series is no different. Despite its size, it's one of the more agile cars in the luxury saloon sector. Unlike Jaguar's XJ and Mercedes' S-Class, BMW sacrificed a some of the 'magic carpet' sensation as it pursued a sporting angle, but the overall experience is noticeably thanks to some clever suspension tweaks for this mid-life facelift model. The smooth-shifting auto gearbox and exceptional engines help its cause, with the gusty 5.0-litre petrol proving impressive. Predictably, the diesels wil likley be better all-rounders if budget is an issue. Handling packages include sports suspension and a computer controlled set-up that reduces roll.

If you don't want to join the 4x4 set on the school run, the Seven can make a surprisingly sensible alternative. However, this car is really more for the grown up family, as you wouldn't want to let pre-school children loose in a car boasting leather upholstery.

The 7 Series is a big, expensive car that requires more than a few minutes of acclimatisation before you can set off. And it's no slouch, either. The car's considerable running costs should be enough to put off all but the richest of novice drivers.

BMW possesses a strong, positive brand image despite the ups and downs of its various 'challenging' exterior design decisions. It's also worked hard to cultivate a loyal following. By broadening the appeal of the Seven it should prove more successful in the global car market, although taste and cultural differences have seen it better received in Asian and Middle Eastern markets in recent years than in the West. Build quality is good - as you'd expect - but some critics have noted that selected cabin materials could be better. That's certainly true of some the light coloured materials.

There are no problems getting into the front part of the cabin - the car's doors open wide, the seats are wide and accommodating and, when programmed, the steering wheel moves out of your way when you exit the vehicle. Rear seat occupants don't quite get the same experience, but it's rare that a passenger would feel short-changed. Of course, choosing a long-wheelbase car changes all that, as the difference is considerable.

Standard fit is a good-sounding and easy to use audio system, with the option to upgrade both it and the navigation element. Bluetooth and MP3 player connectivity is present, while BMW's oft-criticised i-Drive controller has evolved to become a useful tool. The car's colour display screen is easy on the eye, while the different modes for the driver's main intruments can be a little over the top. The electronic display changes according to to the selectrd driving mode, with the full-on red option for 'Sport' mode a little overbaring.

The 7 Series really does look good in BMW's trademark metallic silver hue. The lighter colours help show off the car's complex lines, while black does the opposite. Choices for the interior are varied, with lighter fabrics, wood trim and upholstery emphasising the car's airy coccabinkpit, however some materials don't look that expensive in isolation.

The Seven is a big car, but with the aid of the its generous side mirrors and parking sensors, it soon becomes an easy car to park. And there's no question that the reversing camera helps, too. At slow speeds the Seven's steering requires little effort, and the smooth gearbox makes manoeuvring stress-free.

Jaguar XJ Bold looks and built from high-tech aluminium - good to drive, too

Lexus LS430 Outstanding levels of refinement, but not a great looker. Well equipped, though