Despite its age the Vantage N430 remains a beautiful car 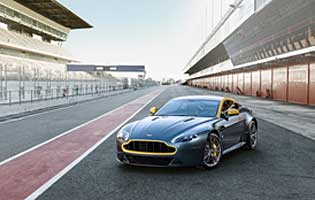 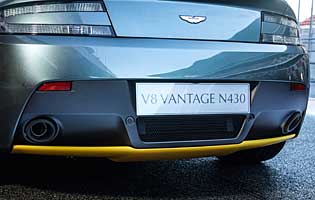 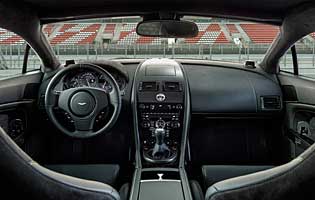 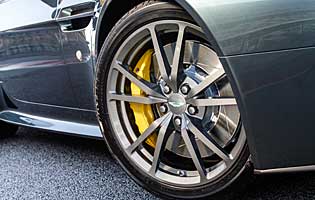 The longest-serving Aston Martin of the current era, the Vantage not only provides the least expensive entry point into the brand but is also its most driver-focussed model. To tie in with the brand's sporting exploits, Aston Martin has introduced the N430 model which as well as some unique details also benefits from some interesting mechanical upgrades over the standard car.

The Vantage range has benefitted from a series of enhancements and detail improvements to build on its existing talents and deliver even more of the thrills of the original car. The Vantage S model was the first step on this path, bringing with it a more powerful engine, a more aggressive chassis set up and visual enhancements designed to maximise the strength of the original design. The N430 builds on this and enjoys many of that car's mechanical changes.

On the outside it wears many of the trappings of a road car that's ready for the racetrack. One of the many paint options for this particular car includes the contrast-coloured grille surround which echoes that of the current and historic racing Astons. It also has black-painted alloy wheels inspired by the CC100 concept. Add to that the discreet rear wing and low chin spoiler and the N430 certainly looks the part.

Under the bonnet there is the familiar 4.7-litre V8 naturally aspirated engine, and in this guise it has an additional 10bhp thanks to some small change under the bonnet. Drive is taken to the rear wheels by a choice of a six-speed manual or seven-speed Sportshift III automatic that combines both smooth shifting in traffic with paddle-activated rapid shifts on demand.

Of most interest to keen drivers are the suspension changes, which are shared with the Vantage S. That means a lower ride height and uprated springs and dampers, while the larger brakes ensure more stopping power. Another useful feature is a 20kg weight saving over the Vantage S thanks to lightweight bucket seats, even though they still retain electric adjustment.

Our verdict on the Aston Martin Vantage N430

The N430 on paper may be little more than a new selection of colours and trims added to some existing hardware, but the bare bones are just as special as they always were. Where more modern rivals employ ever greater amounts of software to go faster the N430 remains satisfyingly driver-oriented. For some it will be too flawed compared to the competition, but keen drivers will find its old-school approach immensely satisfying.

Running costs for the N430 will be very high indeed. The purchase price, fuel consumption and insurance are all at the top end of the scale, making it a car for wealthy enthusiasts only.

The N430 is relatively restricted in terms of space although most importantly front seat passengers are well catered for. The space behind the front seats is useful extra storage, as the glovebox and centre console only offer a little space. Boot space is reasonable for a car of this nature too.

The layout of the N430 is logical and relatively easy to use as well as handsome. The gorgeous floodlit instruments and clear digital displays speak volumes about the quality of the car as a whole and make it a particularly pleasant vehicle to travel in at night. The layout of the main controls in the centre console is now quite old, and can be a little fiddly compared to more modern system.

Compared to the standard Vantage the N430 has stiffer suspension, and the result is a firmer ride and subsequently less comfort on broken roads. However road and wind noise are well disguised and at a cruise the engine settles down to a discreet rumble. The seats are also very good, with full electric adjustment to attain an excellent driving position.

Befitting a car of this price and exclusivity, the N430 comes with an alarm and immobiliser as standard. This can be upgraded to include a tilt and intrusion sensor, while a tracking device is also on the options list.

With an immensely strong chassis the N430 offers a high level of passive safety, while the high performance brakes and suspension, combined with a standard stability control system promise an equally high level of active safety. Traction control can easily be provoked, but is not intrusive.

At its best when driven with enthusiasm, the N430 has firmly-weighted controls that can be heavy going in traffic but come into their own when on more open roads. The big V8 engine is happy to rev around past 7,000rpm delivering mighty performance in the process. The handling matches the performance too, while the sharp steering and firmly controlled suspension mean it is a real pleasure to drive.

The N430 is not a suitable family car, with just one seat other than the driver's available. At a stretch the boot will swallow a child's pushchair but with room for little else.

The N430 is too expensive for the vast majority of new drivers, as well as being quite a demanding car to drive.

The N430 shows clear attention to detail and high quality materials throughout, and although it is a relatively old car the level of quality has been improved over its lifetime. The same can be said for its image, which is close to peerless. The combination of a famous back catalogue of fine performance cars alongside a highly successful racing heritage and cinematic appearances make it one of the most desirable cars money can buy.

The N430 is a strict two-seater and with just a pair of doors there is a large aperture for passengers. It is quite a low car however and the seat bolsters are relatively large, so a little care is required when climbing aboard. Access to the storage behind the seats is simple once they have been tilted forwards, and access to the boot is fuss-free.

All Vantage models are fitted with a premium audio system as standard, with a powerful 700W amplifier and a dedicated iPod connector. Steering wheel controls allow easy operation and the sound quality is exceptional, regardless of the input device.

The unique elements to the N430 model are key to its appeal over the standard car. The distinctive Aston racing colours of green with yellow details look sensational, although even in more subtle shades the black alloy wheels look superb. On the inside the trim is of a high standard, although some of the minor buttons look and feel quite old.

Given its low slung driving position and lack of conventional bumpers, parking the N430 can be a little nervy at times. Rear parking sensors are standard and certainly help to take some of the stress out of it, although the steering isn't best at low speeds and the alloy wheels are very susceptible to kerbing.

Mercedes-Benz SLK55 AMG More of a hotrod for the road, bonus of folding hardtop