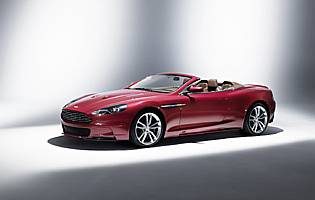 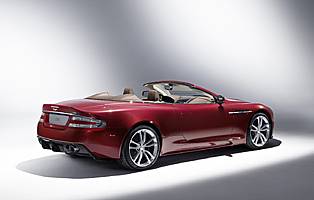 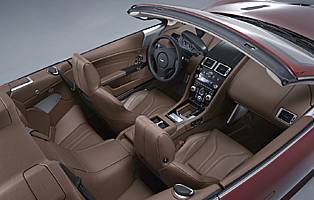 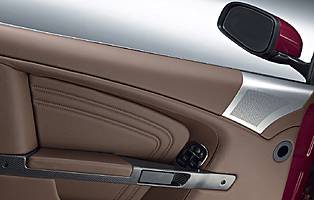 Having comprehensively worked over the DB9 Coupe GT to deliver the even higher performance DBS, Aston Martin has applied the same package of improvements to the DB9 Volante convertible model to create the DBS Volante. More aggressive styling and greater on road performance are now available with roof-down thrills as a result.

One of the most desirable and sought after grand tourers in the world was given a little more edge when Aston Martin turned its attention to ringing more performance from the DB9. No less than James Bond's car of choice, the Aston Martin DBS Coupe delivered in terms of adding a delicious twist to the range.

The DBS Volante has sharply followed suit boasting a similar package of improvements. Starting with the engine, Aston Martin has gleaned another 40bhp from the 6.0-litre V12 unit resulting in 510bhp. Delivered to the rear wheels through a choice of six-speed manual or six-speed automatic rear-mounted gearboxes, the engine has not only been made more powerful but has also been tuned for greater tractability, with 85 per cent of the unit's impressive torque reserves available from just 1500rpm.

Flaps in the exhaust open above 4000rpm; increasing power, raising the volume and changing the character of the V12's exhaust note. This allows for more refined performance at low speed or even high speed and low rpm. The full measure of exhaust note can be experienced from inside thanks to the folding canvas roof. It disappears completely below a flush panel behind the rear seats in 14 seconds and can be operated at speeds of up to 30mph.

As with the Coupe, the DBS Volante is lighter than its DB9 counterpart. Using carbon fibre for the bonnet and front wings as well as some internal parts helps reduce weight. A super stiff aluminium chassis sits beneath the sculpted bodywork. A rear diffuser, bonnet vents and modified front splitter and side skirts look great but are genuine performance requirements. High performance ceramic brakes are also standard.

Our verdict on the Aston Martin DBS Volante Manual

Significantly increasing performance with little loss in refinement is no easy task, but it's one that Aston Martin has managed with the DBS Volante. Still a comfortable and relaxing GT, the DBS Volante offers greater performance and a more aggressive presence than the DB9. When exploited, the model's performance is as intoxicating as it is styling but the model remains tractable and, with the folding roof, versatile.

Running costs for the DBS Volante will be very high indeed. The purchase price, fuel consumption and insurance are all at the top end of the scale, making it a car for the well-heeled only.

The DBS Volante is relatively restricted in terms of space, particularly given its size. Front seat passengers are well catered for and fully adjustable seats mean there should be no shortage of headroom. Boot space is restricted compared to the coupe as room is required for the roof mechanism, but there's still space for a set of weekend bags and the rear seats can also be used to carry smaller items.

The layout of the DBS is logical and easy to use as well as very attractive, with gorgeous flood-lit instruments and clear digital displays. The button layout is sensible and clear, while buttons on the back of the steering wheel can be used to control the satellite navigation. The roof is operated by a single switch and can be raised and lowered in 14 seconds at up to 30mph, useful in a sudden downpour. The steering weights up nicely at speed and the manual gearbox is slick and precise with a clutch that won't test leg-strength too severely.

The DBS Volante is inevitably more focused than the standard DB9 resulting in a firmer ride. It still behaves impeccably over rougher surfaces however, and the tauter chassis means the DBS Volante remains composed with the roof down. The seats are very comfortable in the front but considerably less so for adults in the rear. Despite its tremendous output, the engine settles down to a refined hum on the move, the exhaust flap system mutes the noise for comfort below 4000rpm. There's a little extra wind noise courtesy of the canvas roof, but road noise is well tempered considering the huge tyres.

Befitting a car of this price and exclusivity, the DBS comes with an alarm and immobiliser as standard. This can be upgraded to include a tilt and intrusion sensor, while a tracking device is also on the options list. A canvas roof is less secure than a metal one, but the sturdy look of the DBS Volante's top makes it less of a target than some obviously lightweight examples.

With an immensely strong chassis the DBS Volante offers a high level of passive safety, while the high performance ceramic brakes and firm suspension, combined with a standard stability control system promise an equally high level of active safety.

Beautiful as it is, the real pleasure of a DBS Volante comes with the driving. The 6.0-litre V12 delivers effortless performance. Even very light throttle applications release large amounts of torque and any gear at any speed produces purposeful acceleration. Use all the revs and the performance is shattering, and the quoted top speed in excess of 190mph feels easily attainable. The handling is equally impressive with a high level of composure and feedback through the chassis and controls. Aston Martin's engineers have succeeded in retaining the DBS Volante's chassis rigidity despite the loss of the solid state roof. The manual gearbox features well spaced ratios that suit long distance cruising, high performance driving or town use and the model is a pleasure to drive in all three scenarios.

The DBS Volante's family appeal is limited by its small rear seats - only the smallest child seats will fit. The truncated boot is insufficient to carry large amounts of luggage, too.

The DBS Volante is too expensive and powerful to suit even the wealthiest first time car buyer.

Like the coupe, the DBS Volante is right at the top of the quality tree, with clear attention to detail and high quality materials throughout. The end result is a car that is a pleasure to operate, right down to switches on the dashboard or opening the boot. The model's image and kerb appeal is arguably even greater than its hard-top stable-mate. Internationally recognised and revered for its styling, it's one of the most desirable cars money can buy.

To aid access the doors have been cleverly designed to open out and upwards. Regardless, the low seating position and long doors can make the model difficult to access with something parked alongside. Given room to manoeuvre it poses few problems however, although rear seat passengers do have to squeeze a little, even though the front seats slide forward. Access to the boot is adequate, although the aperture is relatively modest.

All DBS models now come with a premium Bang and Olufsen audio system customised for the car and using acoustic mirrors to monitor the occupants and adjust the sound stage to suit. Steering wheel controls allow easy operation and the sound quality is outstanding regardless of the input device. A pop-up sat-nav system can be operated by remote and Bluetooth is standard.

The DBS Volante's cabin can be customised to a large degree, with a choice of wood or metal finishes to the dashboard and a range of leather colours available. In any configuration it is a highly attractive layout, with quality materials and first class construction. Carbon fibre inserts in the doors help to reduce weight and touches such as the glass ashtray are suitably upmarket. Bespoke alloys are on the options list.

Given its low-slung driving position, small rear window and lack of conventional bumpers, parking the DBS Volante can be a little taxing. However, light steering at low speeds helps relieve the stress and with the roof lowered rear visibility is vastly improved.

Maserati GranTurismo Spider has looks to equal the Aston