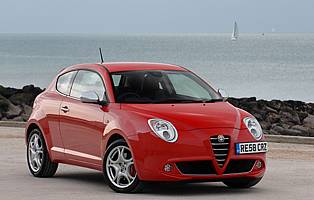 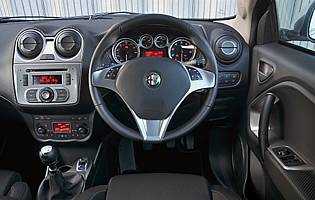 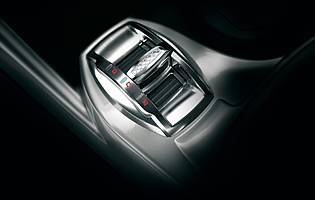 Alfa Romeo is expanding its range into new markets with the introduction of the Mito, a small hatchback slotting beneath the 147 and designed to take on premium superminis such as the Mini. It also brings with it some of the sporty flavour seen elsewhere in the range, and is clearly aimed at youthful and fashion-conscious buyers.

The Mito is unmistakably an Alfa Romeo: even without its badges an average punter would recognise the front-end design. Taking many of its cues from the 8C supercar, the Mito is a little controversial as it squeezes the same headlight and grille arrangement onto a much smaller car. However, it is likely to be a design that people either love or hate, and for those that are keen it will stand out amongst the competition.

Inside the Mito has an upmarket feel, a step above the usual supermini level and clearly aimed at enthusiasts and fashionable buyers. It has the same driver-focused feel of the bigger Alfa Romeos, with a sporty steering wheel and attractive instruments. It also offers a degree of personalisation, with a choice of dashboard colours which also cover the door trims and seat fabrics, adding a welcome dash of colour.

Underneath the eye-catching shell the Mito shares some of its bare bones with the Fiat Grande Punto, although parts such as the brake and suspension systems are unique to the Mito, in keeping with its sportier focus. In addition, the Mito has a number of electronic systems designed to improve performance and handling, most notably the DNA switch, with three modes varying the throttle response, the power steering and the actions of the electronic differential.

Mechanically the Mito offers a choice of petrol and diesel units, though the turbocharged 1.4-litre unit in two outputs is likely to be popular with enthusiasts, as it gives the Mito the status of a junior hot hatchback. All engines come with a manual gearbox too, with no automatic option offered at launch.

Our verdict on the Alfa Romeo Mito 1.4 TB 155bhp Veloce

The Mito has a good deal to offer a buyer looking for a stylish and well-equipped hatchback that has more personality than the norm. The high-output 1.4-litre engine is a pleasure to use, although it is behind some of its rivals in terms of driving pleasure due to the lack of steering feel and inconsistent suspension.

Running costs for the Mito will depend heavily on the engine choice, with the high-output 1.4-litre turbo unit proving the most expensive to run. Insurance costs are relatively modest however, even for the most powerful versions.

The Mito sits comfortably within the supermini sector thanks to its exterior dimensions, although its focus is more towards keen enthusiasts rather than those seeking maximum space. Rear seat space is only adequate, while boot space is average for the class. In practical terms the Mito offers some oddment space, on a par with similarly driver-focused small cars.

The layout of the Mito has a strong sporty flavour with a chunky steering wheel and attractive instruments. Functionality does take a back seat to style inside the Mito however, as some of the minor controls seem oddly placed or not intuitive. A little familiarisation goes a long way however, and the charm of the design is certainly appealing.

Comfort levels in the Mito are quite good. The seats offer decent support, noise levels are kept in check and as a result it is suitable for long journeys and everyday use. On the minus side the ride quality is somewhat mixed and it sometimes struggles to deal with bigger bumps.

All Mitos are fitted with an immobiliser and alarm system as standard, in keeping with the car's desirable nature.

The Mito's safety equipment list is comprehensive, with all models benefitting from the full VDC system, an Alfa version of ESP, as well as seven airbags on all versions.

The Mito's appeal is centred around its performance, especially in Veloce form with the high output petrol engine, and on this score in does well. With strong torque and an engaging sound it is an enjoyable engine to use, although with the DNA switch in Normal mode, throttle response is poor. The Mito is at its best in Dynamic mode, with the steering and throttle response at their sharpest. The Mito has plenty of grip and is well-balanced, although feedback through the steering wheel is lacking, and drivers who are used to small hot hatchbacks may be a little disappointed.

The Mito is not best suited to family duties as it doesn't make the most of its size and lacks the practicality required. However, children will fit comfortably in the rear and the boot could cope with a single buggy.

The Mito is bound to be a favourite with first car buyers thanks to its style and image. The lesser models in the Mito range will fill most of the criteria, but the high power Veloce versions are likely to be too expensive to buy and insure for inexperienced drivers.

The quality of the Mito is something of a mixed bag, although it continues the upward trend of recent Alfa Romeo products. For the most part the quality is good and, in terms of appearance, it has a well-produced feel. Closer examination shows a few corners cut however, and it therefore falls a little behind the class leaders. The Mito's image is built around the passion and excitement of the Alfa Romeo marque and this has been successfully translated to the smallest Alfa.

The three-door only Mito has large doors which aid access and, although the roof is relatively low, access to the front seats is good. Access to the rear is a little more restricted and, even with the front seat tilting and sliding forward, the aperture into the rear seats will be a little awkward for the less able-bodied. Boot access is straightforward, although there is no proper exterior handle which may lead to dirty fingers.

All Mitos comes with a CD/radio unit with MP3-compatibility, but Veloce models are boosted by the addition of a USB slot which allows MP3 players to be connected and operated. The sound quality is good and the steering wheel controls are useful, although doing anything more than accessing the next or previous track on an MP3 player is awkward.

The Mito is helped greatly by the various colour options for the interior and exterior, particularly the choice of dashboard colours which is rare for a car in this segment. The trim itself is also of decent quality, although there are some areas where penny-pinching is in evidence.

The Mito's relative compactness means it can slot into smaller spaces and the very light power steering is useful at parking speeds. However, the car's styling does mean that visibility is only average and parking sensors are only optional across the range.