Along the coast from Polruan

Try this sample walk from the latest edition of 50 Walks in Cornwall.

About 50 Walks in Cornwall

Walking is one of Britain's favourite leisure activities, and this guide to Cornwall features 50 mapped walks from 2 to 10 miles, to suit all abilities.

Buy 50 Walks in Cornwall from the AA Amazon Shop. 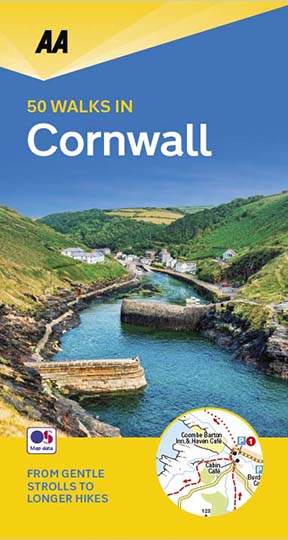 Sample walk: Along the coast from Polruan

There are parts of Cornwall so encompassed by the sea that they seem genuinely out of this modern world. The sea, rather than the dual carriageway, is still their major highway. The village of Polruan on the estuary of the River Fowey is one such place. The green headland on which it stands has the sea on its southern shore and is bounded to the north by the wonderfully calm and tree-lined tidal creek of Pont Pill. The village can be reached by land only along fairly minor roads that detour at some length from Cornwall's main spinal highways. Yet Polruan lies only a few hundred yards (metres) across the estuary from the bustling town of Fowey and a regular passenger ferry runs between the two. Old Cornwall Polruan and its surrounding parish of Lanteglos are redolent of old Cornwall. Prehistoric settlers found a natural refuge on the narrow headland on which it stands. Christian 'saints' and medieval worshippers set up chantries and chapels in the sheltered hollows; merchants prospered from the lucrative sea trade into Fowey's natural harbour. During the wars of the 14th and 15th centuries, Fowey ships harried foreign vessels, and because of their outstanding seamanship, earned themselves the admiring sobriquet of 'Fowey Gallants'. The entrance to the estuary was protected from attack by a chain barrier that could be winched across the river's mouth from blockhouses on either bank. In peacetime the Gallants continued to raid shipping of all types until Edward IV responded to complaints from foreign merchants, and several English ones, by confiscating ships and by having the protective chain removed. Resilient as always, the seamen of Fowey and Polruan turned their hands successfully to fishing and smuggling instead. The route of this walk starts from Polruan. It wanders through peaceful countryside that was once owned by wealthy medieval families who played a major part in organising the freebooting activities of Polruan seamen. Original fortunes made through piracy were turned to legitimate trade and to farming and land management, and the delightful countryside through which the walk leads is the product of long-term land ownership and rural trade. At its heart lies the splendid Lanteglos Church of St Winwaloe, or St Willow. The second part of the walk leads back to the sea, to the steep headland of Pencarrow and to the dramatic amphitheatre of Lantic Bay with its splendid beach, an old smugglers domain if ever there was one. From here, the coastal footpath leads airily back to Polruan and to the rattle and hum of an estuary that has never ceased to be alive with seagoing.

To extend the walk, cross the head of Pont Pill, just down from the junction on the main walk at Point 3 on the main walk. It is hard to resist, once you've diverted to the charming creekside settlement of picturesque Pont.A little footbridge beckons; the wooded heights opposite draw you on; good things are hidden amid the trees. At Pont are the remains of a lime kiln indicating that the quay here was once busy with sailing barges offloading limestone, sand and coal, and carrying away grain, timber and farm produce, worthier, if more mundane trades, than piracy and smuggling.Once over the bridge, at Point A, bear right along the path, which is signposted to Bodinnick. Turn left at a T-junction and climb up through the trees of the Grove and emerge on to open fields. Go diagonally left across the first field, then go through a gate and follow the next field-edge to another gate. Go along the right-hand edge of the next field and through the middle gate of three on to a track. Soon you'll pass the ruins of the 14th-century Hall Chapel. On a bend just beyond the chapel, keep ahead through a gate into a field. Keep straight on and follow the right-hand hedge to a wooden stile. Beyond the stile, at Point B, join the Hall Walk path, by a war memorial.Turn right if you want to visit Bodinnick, another settlement on the tidal River Fowey that played an important part in the history of the area. On the main route, turn left along Hall Walk, a 16th-century estate promenade. Follow Hall Walk round Penleath Point to where a granite memorial commemorates the novelist Arthur Quiller-Couch, who wrote under the pen name of 'Q'. He lived for many years in the area and immortalised the town of Fowey as 'Troy Town' in his novels. Eventually the path enters woodland and continues to a kissing gate into a field above the Grove. Keep ahead to find ( a stile and gate on the right; turn right to retrace the outward route back towards Pont.

The handsome Church of St Winwaloe, or Wyllow, has notable wagon roofs containing some original 14th-century timbers as well as many other beams added during later centuries. The side walls and piers lean engagingly to either side. In summer, there's also squash laid on for thirsty visitors. The novelist Daphne du Maurier was married here in 1932 and the church features as 'Lanoc Church' in her book The Loving Spirit.

Spend some time exploring Polruan, at the beginning or end of the walk. This fine little port has retained much of its vernacular character in spite of some modern development. Polruan thrived because of seagoing and there is still a rich sense of those former sea-dominated days in the narrow alleyways of the village.

Buy 50 Walks in Cornwall from the AA Amazon Shop.