New design aligns the Tiguan closely to the Golf, Polo and Passat 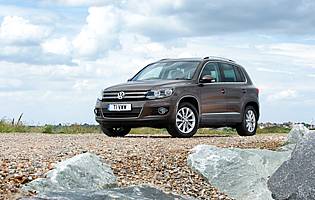 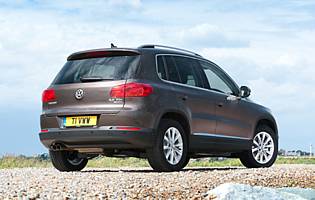 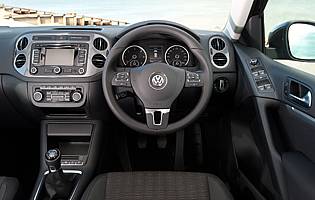 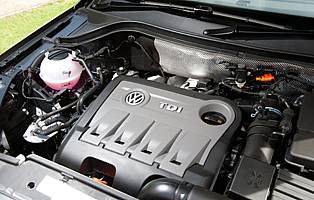 The Tiguan is Volkswagen's fourth best selling model in the UK, behind the Golf, Polo and Passat, and is very important to the company. A range of mid-life updates have brought it into line with the latest trends for lower fuel consumption and CO2 emissions, with the aim of securing more buyers in a competitive market sector.

At the top of the list of revisions is the range of engines. Four of the six available are new to the Tiguan, and with three petrols and three diesels to choose from the Tiguan covers almost all potential buyers' desires. Next are the exterior changes, which see in particular the front end of the car fall into line with the latest VW designs.

Based on the Golf platform, the Tiguan has always been a neutral, stable car to drive. The revised version is the same; surefooted and predictable while accelerating, braking and cornering, though in the latter case there's noticeable of body roll. However, the standard suspension on SE trim cars is more comfortable than the variable system on the more expensive Sport models.

There is plenty of room in the back for three children, but shoulder room isn't as generous as legroom is, and adults will spend the journey rubbing shoulders. The boot floor is large in terms of its area, but due to the presence of the 4Motion four-wheel-drive system between the rear wheels the load bay is quite high.

There are several different configurations to explore in the Tiguan, including both two- and four-wheel-drive, with the former offering improved fuel economy and lower road tax costs. The latter helps to boost the car's versatility, and would be a good choice for anyone planning to tow or embark on any light off-roading.

Our verdict on the Volkswagen Tiguan SE BlueMotion

The Tiguan is an example of evolution rather than revolution, with some worthy updates to the engine range making it more appealing than ever on paper. The Tiguan is a very competent car that will do everything asked of it. For the sake of purchase price and running costs, the two-wheel-drive versions are best if you never plan to push the car hard. For heavier duty use the all-wheel drive variants will make more sense.

While the Tiguan is at the top end of the sector's price range when compared to its rivals, the two-wheel-drive diesels with BlueMotion technology do at least achieve respectable fuel economy figures. The four-wheel-drive versions are thirstier, and combined with the powerful petrol engines are best suited to lower than average annual mileages.

Those in the front seats will have no reason to complain, but in the back three adults might find themselves wedged against one another depending on their sizes. The boot could be bigger, but most people will find it big enough as it is. The high load lip means quite a lift to put heavy objects inside, although the flat load bay helps.

The standard Volkswagen displays in the Tiguan are clear and easy to read, with a mixture of digital and analogue readouts. The controls, including the ancillary stalks, are easy to find and use, although the extra stalk for the cruise control system on some models could be more intuitive.

The standard suspension on the SE trim is the best setup, because while it strikes the right balance of comfort and straight-line control, the adjustable Sport suspension always seems firmer. The cloth seats are typically firm, particularly on the seat backs, but the optional leather upholstery softens things up a little. All seats can be reclined.

Much of Volkswagen's security programme isn't written down on the spec sheet. While the list is confined to an alarm, an immobiliser and remote central locking, the company's cars consistently perform very well in independent security tests, proving very difficult to steal without one of the two included key fobs.

All the basic safety requirements are met, including a good spread of airbags, height-adjustable seat belts in the front, and three-point seat belts for all occupants. All models have 'ABSPlus', which adds Electronic Brake Force Distribution to ensure a confident emergency stop should you need it. ESP is also standard.

The Tiguan's strengths are in its predictable, stable drive and solid road holding, which will inspire confidence. While most drivers will no doubt be satisfied by what the Tiguan offers, it doesn't generate any sort of excitement or involvement for the keen driver. The diesel engines are particularly good performers however, and the all-wheel drive system is unobtrusive and effective.

This is a typical family car, with all the attributes a family man or woman might look for. It's particularly well suited to families with two children, or perhaps three young ones. The two-wheel drive diesel versions are economical and relatively cheap to tax, and have excellent all-round family appeal.

There is no real reason why the Tiguan wouldn't make a fine first car for an older driver. Its raised driving position is inspires confidence and the parking sensors will help people avoid any low-speed bumps. The price, however, means that the Tiguan is beyond the reach of most first-time buyers.

Arguably, Volkswagen has crafted for itself the finest image of any non-prestige brand, which makes its cars very desirable to buyers. Its marketing strategy promotes ideas of confidence without arrogance, and its cars are known for their unassuming good looks and self-assured nature. The physical quality of the product is very good.

With doors that open wide, the Tiguan scores well here. The only impingements to accessibility are the sloping roof line over the rear doors, and that the rear door aperture isn't as large as some passengers might hope for. The boot is wide and, thanks to a flat loading area from the bumper backwards, easy to slide luggage in and out of.

There are no less than four optional in-car entertainment systems for the Tiguan, from a simple upgraded stereo and eight-CD multi-changer to a comprehensive sat nav system complete with voice control integration, or a combination of both. The standard system is adequate for listening to the radio, but the 'Dynaudio' package offers the highest quality.

The Tiguan boasts a selection of colours that are befitting of its sober nature, so expect shades of low-key colours. The trim, both internally and externally, is generally of high quality, and overall it suits the character of the car - It helps it avoid any apparent pretentions of off-road ability.

The constant drive towards safety is seeing roof pillars getting ever thicker, and the Tiguan does suffer from restricted visibility because of that. The boot line is also very high, again typical of modern designs. However, SE models have parking sensors front and rear, which helps offset the impairment to physical visibility.