Lower front spoiler is only change at the front 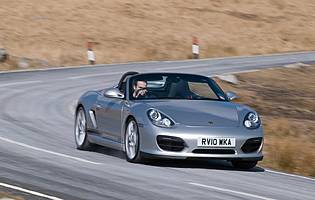 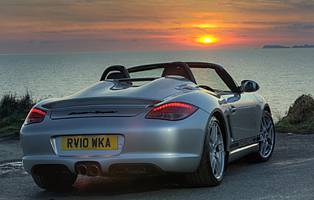 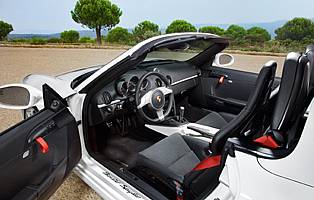 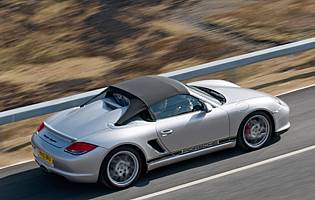 By far its most popular model, Porsche is expanding the Boxster range still further with the introduction of the Spyder. Evoking a name that has a long heritage within the brand, the Spyder uses the traditional recipe of more power and less weight to create a still-more focussed and engaging convertible sports car.

The Boxster is now a well-established favourite amongst Porsche fans, as it brings a high level of driver involvement and all the prestige of Porsche ownership but without the full financial commitment of a 911. There are two engine sizes, two gearbox choices and a wealth of options to tailor the car for a bespoke feel, but the addition of Spyder brings a third model to the range.

The biggest difference between the Spyder and its Boxster siblings is weight-saving. Thanks to a number of changes, the Spyder weighs a significant 80kg less than a Boxster S, although much of this weight loss is achieved through the removal of equipment, which can then be put back in through the options list. The most obvious change is the rear lid, which is made from aluminium and has a 'double-bubble' shape, similar to the Carrera GT supercar. The roof is now a fully-manual fabric affair which requires the vehicle to be stopped in order to extended or retract.

Both power plants were revised in 2009, and the Spyder uses a development of the Boxster S unit to produce 320bhp, a 10bhp increase. All units are flat-six in configuration with the Boxster S and Spyder employing direct fuel injection. The Spyder also shares the transmission choices of the regular Boxster, with a six-speed manual or seven-speed dual clutch automatic called PDK.

Thanks to the extra ratio in the gearbox and its efficient design, the PDK offers better economy and lower carbon emissions than the manual equivalent. A new development of the PDK in this installation and in other Boxster models is the option of a single paddle behind each wheel - one for up and the other for downshifts - in response to customer feedback against the twin-button design on existing cars.

Our verdict on the Porsche Boxster Spyder

The Spyder offers small but notable gains over the Boxster S on which it is based and, with a higher purchase price but less practicality, it is clearly a car for the focussed driver. But it brings spectacular thrills and promises the kind of robust and long-term ownership experience that will last for years.

The Boxster Spyder requires a considerable investment in basic form with costs rising once options are added. Even so, the models have traditionally boasted excellent residual values so a sensibly specified car should see sensible returns. The handling of the model would be considered by some to be worth the money alone although, for the more casual driver, the decreased fuel consumption will be more of a benefit. Servicing and parts will not be cheap, however, reliability should be strong.

For a two-seater sports car the interior feels spacious. Despite its wrap-around design there's plenty of room in which to get comfortable. Door bins and glovebox are modest, but, with luggage space front and rear, the Spyder can accept a surprising number of bags and cases.

The cabin layout is improved over older cars, with the classic Porsche script dominating the large spread of dials in the centre of the dash. The rest of the controls feature decent ergonomics, with weighty steering full of feedback and controls that are easy to operate once understood. The PCM system does a good of tidying up the centre console, although with additional equipment specified there's still a lot going on.

Although relatively comfortable, the Spyder makes comfort concessions in order to save weight and maximise performance. The temporary-style roof does not offer the same level of noise insulation as the regular Boxster, and the sports suspension offers less compliance on rough roads.

The Spyder is a car that always attracts attention - most of it is positive but you've got to be prepared for the inevitable negative attention from vindictive individuals and the criminal fraternity. Thankfully Porsche has covered the usual bases with the likes of an immobiliser and remote central locking. The weakest part of the car is its roof, which is incompatible with the hardtop available for regular Boxster models. An optional tracking system offers extra peace of mind.

The Spyder's ultra-firm chassis affords its own level of safety and special attention has been paid to protecting occupants when the roof is down with a strong safety cell and a body that diverts energy around it. Roll-over bars are also present as are head, thorax and frontal airbags. The PCM stability control system is a potential lifesaver too, able to assist in braking and in countering oversteer very effectively.

The Spyder offers an even more intensive version of the Boxster experience, with decreased weight, more power and stiffer suspension. Arguably the Spyder only offers a modest increase in dynamism over the regular Boxster S, but for many buyers the fact that this is the ultimate Boxster will be enough. The sharpness and accuracy of the steering, the weight of the controls and the response and performance of the engine add up to a spectacular drive in the right conditions.

With the ability to take only one passenger, the Spyder is definitely not a family car. If you can afford it, the baby Porsche would make a great second car alongside the firm's family-orientated Cayenne. But on its own the Boxster is a firm no for family duties.

Expensive and with insurance premium baiting performance, the Porsche Boxster Spyder would be a poor choice for the young driver. It will also be too powerful for the majority of novice drivers.

Porsche's image has traditionally been very strong and, although the Boxster got off to something of a troubled start, it has established itself as a worthy wearer of the Stuttgart badge with its strong performance credentials and Porsche-like driving experience. Its kerb appeal is somewhat hampered by a partly deserved reputation as a poser's car, but anyone who knows their cars will understand that the Boxster's on road performance negates those opinions. The quality is not in doubt, with robust standard of build and materials.

Driver and passenger sit low down in the Boxster, worth bearing that in mind if you're not the most agile. Getting out of the low-slung position tends to be more of an issue than getting in. The car's doors are big, so making a dignified exit in a crowded car park is a challenge.

Standard equipment levels are minimal, with no audio system or air conditioning. This is part of the Spyder's lightweight approach, although you might expect to pay less rather than more for the lack of equipment.

Fans of older Porsches will welcome the addition of graphics along the side of the Spyder which hark back to Club Sport models of the 1980s, and these help to differentiate from a regular Boxster. A wide range of exterior and interior colours and trims are available, although to truly benefit from the Spyder's abilities the less equipment, the better.

Honda S2000 Rev-happy Honda has loads of character but ageing