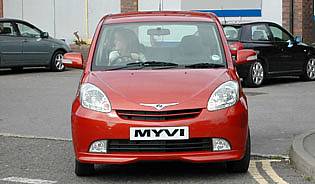 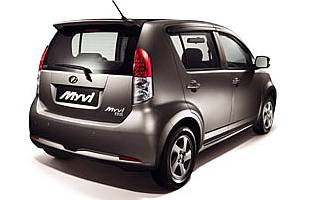 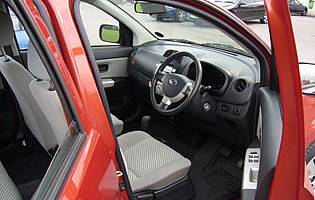 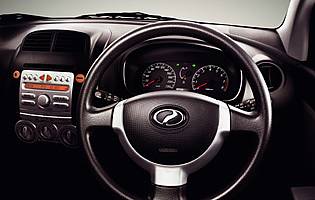 For a budget supermini, Perodua's Myvi SXi is an economical, spacious and comfortable offering. Perodua has made efforts to market the Myvi as a sporty car, however it performs best in lower gears at a more sedate pace.

The Myvi is Malaysian car manufacturer Perodua's third model to be launched in the UK, the budget Kelisa and Kenari on sale since 2000. The Myvi's main selling point is its low price. The Myvi has enjoyed considerable success in Malaysia, where its quirky looks help it stand out somewhat in the crowded domestic market. However, the more competitive and crowed UK market isa different environment.

Compared to other cars in the European supermini sector, the Myvi features little other than the basics, and spells 'budget' to even the untrained eye. Its cheap interior plastics and fabrics cannot match those of the competition. Despite the Myvi's cosmetic flaws, Perodua's collaboration with Japanese engineers is evident, and you can't help suspect that the mechanics of the Myvi have potential to outlast those of many of its rivals.

The Myvi works best at leisurely speeds and in urban traffic. The car's engine is surprisingly torquey in lower gears, and the car boasts a tight turning circle to make parking and manoeuvring relatively painless. Working your way through the gears is simple and produces decent levels of progress.

Like other budget superminis, Perodua's Myvi performs less well on long-distance runs. At motorway speeds cabin noise, vibration and a bit of rattle become evident on all but the best road surfaces. The high driving position could lead you to assume you'll be subject to pitch and roll, when it comes to cornering, however the car's wide stance and suspension provides a pleasingly competent ride.

Our verdict on the Perodua Myvi SXi

Perodua's Myvi is a surprising performer, and is suitable for young drivers wishing to purchase a new car as well as elderly motorists or those requiring exceptionally easy access. However it should be noted that for relatively little added cost, potential purchasers of the Myvi can pick up a superior and more familiar, trusted performer from one of the popular European marques.

The Myvi's initial purchase price is certainly attractive, while its modest running costs should help it compete against similarly priced used cars. After all, why buy used and except an inferior warranty when there's the choice of a new car with a more generous, manufacturer-backed warranty.

The boot is reasonably spacious for a supermini, and the Myvi's 60:40 split/fold flat design for the rear seats means the rear load space can be almost doubled to 630 litres should extra luggage capacity be required.

All controls and displays are conventionally positioned, with the curious exception of the speedometer, which sits above and to the left of the steering wheel, as opposed to a position to the right as with most cars.

The Myvi's high roofline results in plenty of headroom for taller occupants. The adjustable driver's seat and height adjustable steering column will mean that most drivers should be able to find a comfortable driving position. The Myvi can suffer from excessive noise, rattle and vibration at higher speeds, but otherwise it offers relatively good levels of comfort.

Both models features remote central locking and an engine immobiliser as standard. And to be honest, this is all you can expect to get on a car at this price point. It might be a rare sight on the roads, but it's unlikely to be on a thief's shopping list.

Along with front crumple zones and a body structure designed to absorb the impact of a collision from any angle, the Myvi benefits from a number of active and passive safety features as standard. These include ABS/EBD, driver and passenger airbags, head impact protection devices, and seatbelt pretensioners.

The Myvi is surprisingly pleasant to drive, although less sprightly out on open roads despite its modest size and weight. It is lively in town with responsive steering and a keen engine, while the ride is fairly well composed on poor roads.

Being a supermini, the Myvi is not an ideal family car. However, it is a five-door hatchback, and it can seat five passengers in reasonable comfort. Storage space is modest, provided in the form of door bins, drop down glove box and cup holders in the front and bottle holders in the rear. The rear doors are fitted with child safety locks, although there are no Isofix/child seat mounting points.

Because it is small, cheap, characterful and exceedingly easy to drive, the Myvi will appeal to first time buyers on a tight budget. Easy to park and manoeuvre around town, the Myvi makes a lot of sense in practical terms.

In Malaysia, Perodua is a massive brand, however the same cannot be said in the UK and Europe. The manufacturer's sole claim to fame is that it sells the cheapest new car, in the form of the Kelisa. While there's little negative to report over the car's build quality, perceived quality and the choice of cabin materials could be better. However, it's difficult to protest too loudly when you factor in the car's asking price.

The five-door Myvi's cabin is easily accessible for front and back passengers with its low sill height and tall roofline. The car's doors open wide and the seats are positioned to make access and egress straightforward.

The Myvi is fitted with an integrated four speaker RDS radio/CD player with a pleasing orange backlight as standard. As it is a fairly basic unit, it is easy to operate, and includes handy traffic alert and mute functions.

The Myvi comes in seven external colours, including metallic paint at no extra cost. Trim levels are distinguishable only by transmission type. Quality-wise the cabin trim can't match that of the mainstream opposition. It might prove durable in the long run but first impressions are a little disappointing.

Parking is simple - not least because of the Myvi's small proportions. The car features responsive, power assisted steering and a tight turning circle. It also has excellent all-round visibility afforded by its high roofline and raised driving position.

All models come with space saver wheel as standard.

Daihatsu Sirion More expensive but with a more familiar badge