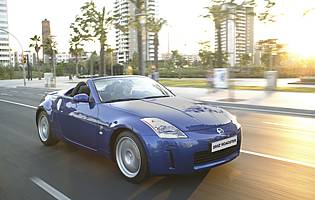 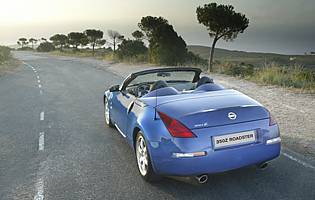 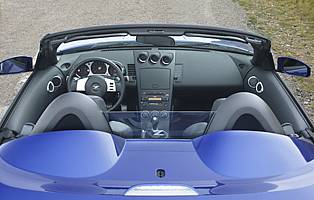 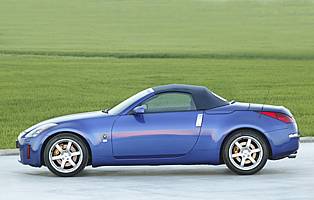 Nissan hit the jackpot with its 350Z Coupe when it was first launched. Although the Japanese car maker is no stranger to making enjoyable and accomplished sports cars, its most successful efforts were from a bygone era - hence the excitement over the 350Z from a company now associated with cute superminis and chunky 4x4s. The drop-top Roadster variant adds a new dimension to the 350Z experience; visually stunning it boasts the original's shattering pace but is less frenetic at higher speeds.

What a difference the lack of a roof makes. As if the regular 350Z Coupe wasn't desirable enough, the Roadster variant adds a new dimension to the car that is helping to boost Nissan's fun side. While the performance attributes of the 350Z are impressive, it's the way it's been done at such an affordable price that makes the car special.

Generously equipped to the point that embarrasses many of its rivals, the 350Z requires the buyer to make no compromises. In fact, Nissan's generosity stretches to the car's engine, which produces 280bhp. Not only is that enough horsepower to get you into serious trouble - in the nicest way possible - its more than similarly priced rivals from BMW, Audi, Mercedes and Porsche can boast.

Yes, even the mighty Porsche Boxster, in standard trim, can't live with the Nissan thanks to a difference of around 40bhp. And there's the rub; the company that makes Micras will happily sell you a Porsche-beating drop-top for considerably less money. If you ever need proof that the Japanese firm never lost the knack of building affordable sports cars, this is it.

But what really makes the 350Z Roadster? In truth there's no one thing that stands out; the car's handling is user friendly but sharp, the V6 engine sounds wonderful yet is docile around town despite its horsepower potential and the car looks great. Each run in the Nissan is more of an experience than just a drive, something that's made even better each time you lower the roof.

Our verdict on the Nissan 350Z Roadster GT Pack

It was only a matter of time before the 350Z Coupe lost its head. The Roadster variant is a fantastic piece of kit if you like two-seat, open top cars with a healthy slug of power. The classic front engine, rear-wheel drive layout of the Nissan is spot on, affording the driver one of the best experiences around. With the hood down the car sounds fantastic, while the slight weight increase over the Coupe has given the Roadster a fractionally softer - and welcome - personality.

To call something like the 350Z a bargain is just asking for ridicule but the truth is, for what the car offers, it is exceptional value for money. However, in real terms it still costs a fair bit in terms of insurance and fuel - especially the latter if you plan on enjoying the car to the full.

The 350Z Roadster's cabin is strictly a two-seater one, and the car's boot is a modest size as the rear of the car must accommodate the folding roof mechanism. Bear that in mind and there's every reason to expect the Nissan to be practical enough to be used as an every day car. Convertibles are never the best environment in which to leave possessions on show in the cabin, but the 350Z has a few covered storage areas, namely a modest glovebox, central fascia lidded compartment and lockable area behind the passenger seat.

Don't be disappointed by the lack of flashy controls in the 350Z's cabin, hopefully you'll be too busy concentrating on the road. What you do get is a clear and concise layout, with the stereo and ventilation controls where you'd expected them - within easy reach on the lower half of the fascia. Helping matters further is the inclusion of steering wheel audio and cruise control switches. The main dials, housed in an attractively styled binnacle are a little small but nevertheless easy to read. As an added bonus, the binnacle moves with the steering column so you always get a clear view.

You might have to ease yourself down into the 350Z - even when the Roadster's hood is down - but once seated you'll find the driving position comfortable and supportive. If you can, go for the electrically powered leather seats as they really do make a difference. The adjustable steering wheel offers a number of positions, while the car's ride is surprisingly pliant around town - for a car of this type. Make no mistake, it can get noisy at speed but that's all part of the experience.

Convertibles will always play second best to cars with conventional metal roofs. If you can live with that then the extra risk - especially when it involves a car as attractive as the 350Z - then you should be fine. That said, you do get the usual remote central locking and immobiliser to help protect your pride and joy, and the stereo won't fit in any other car.

Any car - but especially a quick one - requires a comprehensive range of safety kit. The drop-top Nissan comes with ABS, ESP and twin front and side airbags as standard. With the roof up you're afforded a reasonable level of protection, but at least with the roof down the substantial-looking roll bars offer an added line of defence.

This is the reason you buy the 350Z - to have fun. Convertibles always feel more extravagant than tin-top motors, and so it is with the roofless Nissan. This decadent approach to motoring is most apparent when you're accelerating hard with the roof down and the engine's deep howl is bouncing off the road and the scenery. The extra weight of the roof mechanism and the extra bracing has softened the 350Z slightly, which is actually a good thing. Less frenetic and 'fidgety' and more amenable to quick direction changes than the Coupe, the Roadster is a hugely impressive all-rounder. It'll still bite, though, if you're being silly, but the ESP never comes in with a bang

There's little point defending the 350Z as a family car- it's obvious that it won't accommodate a clutch of kids or provide sufficient space for the weekly shop or trips to home improvement stores. It would make a fun second car - budget permitting.

Even if you could afford the car's asking price, it's unlikely that any insurance company would take you on - and with good reason. The 350Z, Coupe or Roadster, is a very quick car. Boasting rear-wheel drive, close to 300bhp and quick responses to driver inputs, only people with experience should consider such a beast.

The 350Z has done wonders for Nissan. The amount of acclaim heaped on the 350Z has been considerable, and with good reason because the striking coupe is a head turner in every respect. The Roadster continues this trend and has opened the door for even more daring future models. If there is a criticism it's that some of the details have been glossed over. There's no question that the 350Z Roadster is a good car, but the cabin materials could be a little better and the overall cockpit ambience is a dark one with the hood up.

A convertible of this type will always be a compromise, but the Nissan is better than some of its rivals. Yes, access to the cabin with the hood up will require you to bend more than normal, although once seated it is a comfortable place to be. With the hood down it's a different situation - no problems getting in or out other than the fact you sit lower than you would in a 'family' car. Getting that roof down is easy as it's electrically powered. The only hitch is the need to be stationary before you raise or lower it, although it only takes 20 seconds to do its thing.

There's not a lot of choice in the entertainment department, as Nissan chose to fit the 350Z with a decent set-up as standard. It may not look much but the unit located in the centre of fascia boasts a radio, cassette and CD player - the latter a six-CD in-dash changer. This already powerful four-speaker unit can be upgraded to one with seven speakers and a more powerful amplifier, which could prove handy when motoring with the top down. Overall, sound quality is very good and the basic controls are duplicated on the car's steering wheel.

While there are some nice exterior colours to choose from, the 350Z is probably most distinctive when in Nissan's striking 'burnt orange' hue. Anyone seeking a more discrete scheme should go for the dark silver or blue. Inside, the car's cabin is on the dark side, making the optional - and matching - dark orange leather upholstery something special. You can also have black if you want.

Although you sit very low down in the Nissan, visibility isn't too bad and it gets easier to judge the car's extremities the more time you spend driving it. Still, it pays to take it easy when reverse parking because the 350Z is deceptively wide, and kerbing the car's alloy wheels is distinct possibility. Over the shoulder visibility is not great with the hood up, but improves enormously with the hood down. While the car's steering is not the lightest and biased more towards fast road driving, it won't stop you from confidently executing quick parking manoeuvres.

Audi TT Roadster Stylish TT has plenty of visual appeal, but will never be the purists' choice

Porsche Boxster The roadster benchmark. 350Z is quicker and cheaper, but the Boxster is more polished