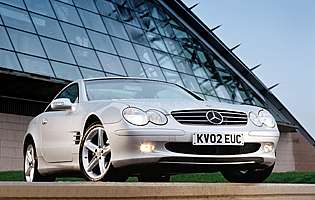 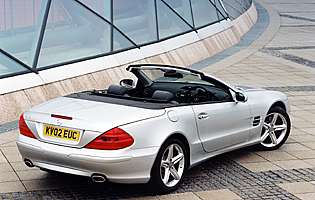 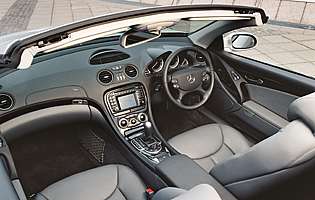 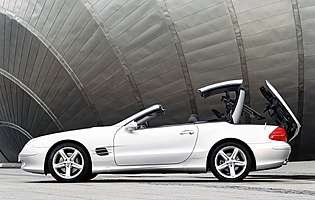 Competing in the upper echelons of the roadster market, the Mercedes SL is possibly the most desirable and exclusive car made by the German manufacturer. Designed with style, performance and grand touring in mind, it has a folding metal roof for coupe and cabriolet versatility.

Originally launched in 2002, the Mercedes SL sits at the top of the Mercedes range, and offers the performance and luxury expected of an exclusive coupe. It also has the distinct advantage of a metal folding roof, allowing it to transform from a coupe into a cabriolet in 16 seconds. As well as offering the comfort levels expected of a Mercedes, it also claims to satisfy a demanding driver, with impressive performance and handling.

A strict two seater, the SL has a long and low bodyshape that recalls the styling of previous generations. The driver and passenger sit low in the cabin for a sporty feel, while the body hugging seats offer good support and comfort. The convertible roof is simple to operate, with all electric operation meaning that a push of the button is all that is required to convert from roof up to down or vice versa.

Out on the road the SL is an impressive machine. Despite its power and performance it is a very easy car to drive, with the smooth automatic transmission and steering that is accurate but not too heavy. The long travel throttle pedal makes it easy to control the power and torque of the engine, while the standard ESP system is a reassuring presence.

Although the SL 500 is a popular version, Mercedes offers a highly impressive engine range. From a smaller V6 which, impressively blends performance and economy, to the outrageous V8 and V12 versions, which are two of the most powerful production engines available in the market.

Our verdict on the Mercedes-Benz SL-Class SL 500

In some ways it is difficult to compare the SL with any rivals, as it successfully performs the role of sports car and grand tourer with equal aplomb. Some drivers may wish for more comfort or others for sharper handling, but for the most part the SL has enough of both to satisfy all but the most exacting buyers.

Running the SL will be relatively expensive, as all the engines will drink fuel if the performance is used to the full. Insurance will also be quite high, all on top of a purchase price, which is beyond many. However, it is well specified and offers a lot of car for the money.

With a two-seat layout, space for passengers is good, with plenty of head and legroom. The space behind the seats is taken up with a pair of cubbies that provide useful extra storage, and there are more storage spaces in the front. The boot is also usefully large, although the volume is much reduced when the roof is folded down.

The SL's high level of standard equipment means there are plenty of systems to operate, yet these are well integrated into the dashboard layout. The instruments are clear, with a very useful series of information menus displayed in the centre of the speedometer. Elsewhere, the centre console display has a clear screen with buttons to access the menus mounted down each side, which makes it an easy system to control.

Given its sports car status, the SL offers a high level of comfort. The seats are superb, with the option of heated, ventilated and even massage functions for improved comfort. The ride quality is also good, and noise levels are well restricted, with wind noise only becoming noticeable at higher speeds with the roof down.

A desirable car such as this needs good security, and the SL comes with remote locking and an alarm/immobiliser system. In addition it can be specified with keyless go, which removes the need to take the key out of a pocket or handbag.

A wide range of safety systems are fitted to the SL as standard, and as well as items such as airbags, ABS brakes and ESP, the availability of the Mercedes Presafe system means that the car constantly monitors its operation, and will prepare the car if it believes an accident is imminent. This contributes to a high level of overall safety.

The SL manages to successfully combine the dual roles of top down cruiser and sports car. With a controlled but supple ride, it is easy to cover distances with little fuss. Occasionally bigger bumps send a muffled thud through the cabin, but this happens rarely. Conversely, when driven at speed the level of body control and handling is good, while the engine provides impressive performance and a thrilling exhaust note.

With only two seats the SL is not practical enough to suit a family, although the front passenger seat is suitable for carrying a child seat.

The SL is an unlikely first car, given its performance and expense, with insurance and fuel bills likely to be high.

Mercedes may have received criticism for a decline in quality standards in recent years, but the SL is the perfect response. Inside and out it feels very robust, with a combination of good design, excellent materials and sound construction. There are very few areas where it feels anything other than very good indeed. Image is also a key aspect to the car's appeal, as its sleek exterior and well integrated folding roof make it highly desirable.

With just two seats, access to the car's cabin is straightforward. The relatively low height means the seat is low down, but aside from this there are no issues. The doors open wide, making it easy to sit inside. The same can be said for the boot, which in roof up mode is good. Roof down access is more restricted, but to an acceptable degree.

With a CD/tuner and six-disc CD autochanger fitted as standard, the SL has an impressive audio system. Sound reproduction is very good, there are remote controls on the steering wheel and source information can be displayed in the instrument cluster as well as on the unit itself. It is also powerful enough to cope with roof down motoring.

With a mix of leather trim, Alcantara and high quality plastics, the SL cabin is a delight to use. Although the dominating interior colour is grey, the feel and appearance of the materials avoids the cabin feeling too dark, helped by the generous glazed area.

With a long bonnet and low stance, parking the SL can be a little tricky, although parking sensors do take most of the stress out of the operation. The door mirror also has the useful function of dipping when reverse is engaged, making it easy to see the kerb.

An emergency tyre weld system is fitted as standard, though a spare wheel option is available.