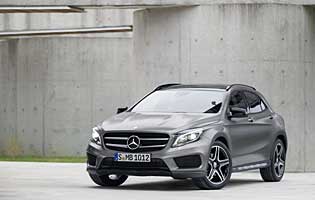 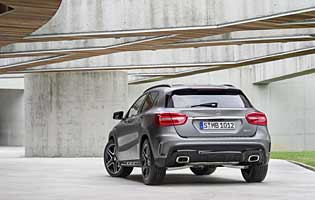 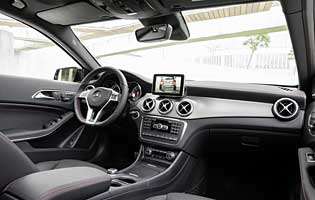 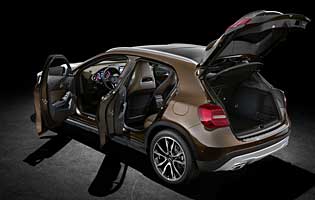 German manufacturer Mercedes-Benz is well known for its off-road vehicles, beginning with the legendary G-Class and more recently the popular M-Class and GL-Class. Now the range is being expanded still further with the GLA-Class which is targeted at the booming crossover segment, where the emphasis is more on appearances and on-road ability than serious mud-plugging.

The importance of off-road vehicles to car manufacturers has increased immeasurably over the last thirty years, from utilitarian working vehicles to the comfortable luxury vehicles of today. A more modern iteration is the crossover, which combines elements of traditional 4x4s with features more typical of conventional cars - this is a segment new to Mercedes with the GLA.

As its name suggests the GLA uses the A-Class hatchback as a basis, pitching it into the most popular crossover segment and in direct competition with key rivals from other premium manufactures. Visually it shares the basic shape of the A-Class, but with a heavy dose of off-road cues.

The suspension is raised by 50mm over the comparable A-Class model, and combined with unique bumpers front and rear, a bigger grille and body cladding around the sills it has the visual toughness that buyers are looking for. It also means the driver has a slightly higher driving position compared to the A-Class, also something that is a big draw in the crossover market.

On the mechanical size the GLA draws on elements of the A-Class but also offers some things over and above its more conventional sibling. Front-wheel-drive and four-wheel-drive versions are offered depending on the engine choice, alongside manual and automatic transmissions. An optional off-road package makes it more viable as a mud plugger but otherwise it is best suited to occasional forays off-road.

Our verdict on the Mercedes-Benz GLA 220 CDI SE

The GLA fulfills a need in marketplace for Mercedes-Benz and widens the brand's model range still further. It offers similar comfort and utility to the comparable A-Class but with the addition of better ground clearance and a slightly improved view out. It also offers greater comfort than the A-Class, and although its off-road ability is modest it packs a lot into a small package.

As long as you choose one of the diesel engine options the GLA should be a relatively inexpensive car to fuel. The greater costs come with the initial purchase price, insurance and servicing.

The GLA offers no additional space compared to its A-Class sibling, so those in the front seats have good head and legroom while those in the rear are adequately provided for, although taller passengers may find legroom in slightly short supply. Oddment space in the cabin is good however and the boot is also well-shaped and generous.

The layout of the GLA is very familiar to Mercedes drivers and uses tried and tested switches and instruments. The dashboard is clear and easy to read, and once you become accustomed to the multi-function stalk that looks after the indicators and wipers it is an easy car to operate. The navigation and audio systems can be operated by steering controls as well as the dashboard controls, although both can be a little fiddly to use at first.

The taller suspension means the GLA rides well on poor surfaces, and combine this with the comfortable seats and impressive refinement makes it a very appealing car in this respect. The only thing counting against it is that the four-cylinder diesel engines can be a little gruff when revved, although the good torque means this isn't often necessary.

All GLA models are fitted with an alarm and immobiliser as standard, while the hatchback rear means that anything left in the boot is well out of sight.

High safety standards are a long-standing feature of Mercedes-Benz cars and the GLA is no exception, offering impressive features such as an active bonnet to mitigate pedestrian impacts, tyre pressure monitoring and nine airbags all as standard.

Once behind the wheel of the GLA it's easy to appreciate the benefits of a slightly raised driving position. The changes to the suspension have a positive affect on the way it drives too, allowing it to deal with bumps in the road more readily without affecting the grip or handling. Both transmission options work very well and the 220 CDI diesel offers good power and torque.

Family buyers will find much to like about the GLA, as it offers sufficient space for a four or five person family and the cabin is finished in materials that should stand up well to the rigours of small children.

The GLA would suit a new driver in respect of its ease of use and running costs, but the biggest issue would be the purchase price and the potentially high cost of insurance.

As far as reputations go Mercedes-Benz has one of the best in the business for quality and the GLA maintains that. Inside and out it feels like a quality product with attractive materials and a high standard of finish. The same goes for image; few rivals can compete with the appeal of the three-pointed star and the GLA will have no trouble attracting buyers as a result.

With the raised ride height and the same five-door configuration as an A-Class, the GLA presents no problems at all in terms of access. Passengers front and rear can climb aboard with ease, while at the rear the tailgate opens easily and the loading lip is relatively low.

The GLA comes as standard with the familiar Mercedes-Benz layout with a large display screen mounted on the top of the dashboard for good visibility, with the rotary dial and dashboard buttons to control it. The system itself works reasonably well although it is beginning to feel dated when many rivals offer touchscreen displays for ease of use.

The GLA's tough exterior is better suited to darker and more sober shades, although it does also looks smart in plain white. On the inside there is a choice of traditional wood or more modern metal finished alongside a choice of upholstery colours so there is an option to suit all tastes.

With decent visibility all round and the slightly raised driving position the GLA is a relatively easy car to park. Its overall size is relatively compact and all models are fitted with a reversing camera which is a very useful addition.