Sharp looks should help car appeal to a younger audience 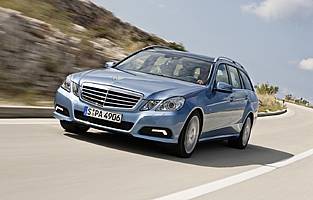 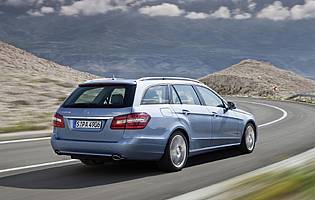 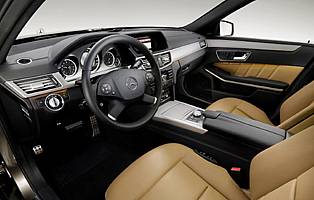 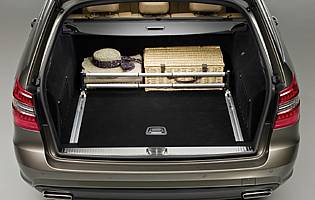 With Mercedes, along with Volvo, having cornered the market in selling sensible estate models, it has been the German marquee that long ago secured the high ground when it comes to luxury. The firm's E-Class estate variant is synonymous with being the antique dealer's friend, and this generation model display's a modern face to the world and is dripping with high-tech equipment.

Although a tried and tested formula, Mercedes is no different from any other car maker and the need to move with the times. Offering a car capable of swallowing the content of a small house is one thing, but looking good in the executive company car park or at the golf club is no equally important to some buyers.

As such, this E-Class is no simple box on wheels. With its saloon relative a sophisticated and striking offering in an otherwise conservative marketplace, it's good to see the estate model following suit. Its rakish nose and angular light clusters project and more youthful and thrusting character than before. And while there's only so much you can do when designing an estate car, the saloon's exaggerated rear wings have made the transition largely unchanged.

Inside the E-Class the tone and ambience is, like the exterior styling, more contemporary and apes that of the smaller C-Class. Over the previous model cabin ergonomics and the overall quality has been much improved, while there's plenty of space for five adults - and two children if you specify the optional rear-facing seats that fold down into the boot floor.

Along with a range of new or modified engines boasting improved economy, emissions and performance, the car's load space is the star of the show. With rear self levelling suspension fitted as standard, you know the Mercedes takes this car seriously. Further options include a powered tailgate and various divider and tie-down ancillaries to ensure your load stays put.

It might look a little different on the outside but little has changed regarding the underlying USP of the E-Class estate. A voluminous and practical yet styling premium estate car, this version is yet another successful improvement on a tried and test formula. Packing cleaner engines and more comfort and safety equipment, Mercedes once again proves why it is king of the luxury load-luggers.

Although not an inexpensive car, this version of the E-Class comes with a generous level of standard kit by German standards. There's also the issue of more efficient engines to consider. Overall, the E-Class is good value for a car in this premium sector, and if reliability stays true to recent form that should be another unscheduled cost you can discount.

In a nutshell there's no shortage of space in the E-Class, be that in the cabin or the load bay. Up front there's enough space for five, plus the optional convenience of a fold flat rear-facing bench for two children that occupies the car's boot space. In standard trim the flat load bay can be extended by folding forward the rear seats, and numerous combinations of dividers and baggage nets can help stop your belongings from moving around.

Legible controls and displays are a Mercedes strong point, and this E-Class is no different. Aside from the usual items, Mercedes has adopted a rotary controller for the main functions of the audio, general settings and, where fitted, sat-nav and telephone operation. Sticking with the standard manual transmission fitted to most cars, you'll have to contend with a foot operated parking brake. Thankfully a 'hill holder' brake function takes the hassle out of starting on a gradient. The console mounted five-speed auto and steering column-located seven-speed unit are obviously preferable.

This is where Mercedes models have always shone, and this E-Class estate continues the family tradition. Road and engine noise has been kept to a pleasing minimum when on the move, while thanks to the car's size there's little chance of occupants feeling squashed. The car's plush yet supportive seats are another plus point.

Aside from the basic provision of an immobiliser and alarm package, there's little else to say. This feature set will do the job in terms of anti-theft protection, though. The sturdy load bay cover is a welcome addition and should offer sufficient protection for whatever is left in the back of the car. For added peace of mind you might want to consider an aftermarket tracking device and subscription - the E-Class is a desirable car.

Along with Volvo, Mercedes has made great strides in terms of passive and active safety technology. Aside from the obvious airbag provision, a driver alert system, lane departure warnings and intelligent cruise control function, specify the full xenon headlight package and it will adapt to your speed and spread its beam accordingly and automatically switch to dipped beam when it detects oncoming traffic.

It's noticeable from the off that this E-Class continues the trend of putting comfort and refinement first. Mercedes engineers have sharpened up the car's responses though, and the big estate is surprisingly willing to change direction and engage the driver. Overall it's a good balance of agility and comfort. The updated engine range compliments the car's rejuvenated enthusiasm for the road. In particular the low power diesels are the most surprising, while all oil-burners are quiet when even worked. The smooth-shifting manual gearbox is impressive, but will remain a fringe choice in the face of the polished auto options.

If the people carrier isn't an attractive option for whatever reason, the E-Class is a respectable alternative. You might need to present a business-like face at work and transport the family and their clobber at weekends, for example. The cabin will easily seat four adults - five if you ask nicely, while the estate car's boot will swallow both shopping and baby buggies in one go.If you're willing to sacrifice some space, the optional twin rear facing seats that would normally hide in the boot floor turn the E-Class into a seven-seater.

Despite its appeal, the E-Class estate is unlikely to be top of the list for novice drivers. It's a large car that requires a fair bit of skill to park and manoeuvre at low speeds, and there's also the small matter of the executive-level running costs. However, because it is easy to drive it's unlikely to intimidate anyone.

Without wishing to repeat the observations related to previous generation models, it's fair to say that the car and its maker enjoy a good relationship with its owners. There have been a few hiccups in the past centring around reliability issues, but even these have failed to dent the maker's image. The efforts made to publicise the hard work that's been done to resolve past issues appear to have done the trick.

With its spacious cabin and wide opening doors, access to the car's interior shouldn't be a problem. This is also helped by a seating position that is raised slightly to aid comfort and accessibility. It's a similar story at the rear of the car, with the tailgate proving easy to raise and lower by hand. The powered option is an attractive one, and can be accessed via the key fob. It's slow to operate but there is a manual override.

The standard option works surprisingly well, with the main display easy to see and the various major and minor controls all logical and to hand. Predictably there are many extra cost options to choose from, with a choice of basic and advanced navigation systems, audio upgrades - including MP3 and iPod connectivity. Everything works as you'd expect, with the iPod navigation through the audio system particularly straightforward.

As befits a premium executive model, the traditional dark and silver metallic hues best suit the E-Class estate. Not only do such choices flatter the car's size but they also reinforce its business-like role in life. The subtle chrome accents are a welcome addition, while inside opting for a dark ambience helps to boost the perception of a quality interior.

For all the car's newfound agility it remains a large vehicle, and car must be taken in areas where space is at a premium. The car's steering offers plenty of low speed assistance and the parking sensors make life easy despite the good all-round visibility the estate bodyshape affords.

Audi A6 Avant Stylish, well built and good to drive. Quattro-equipped cars are better to drive than front-drive models