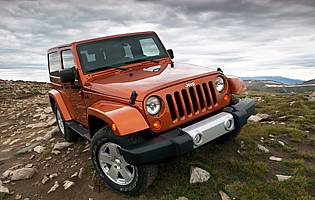 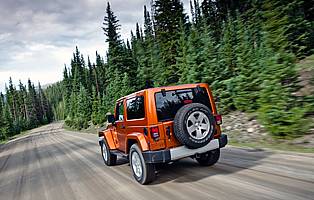 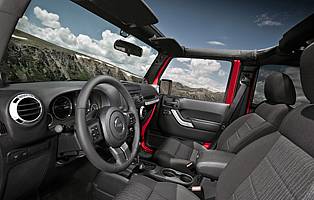 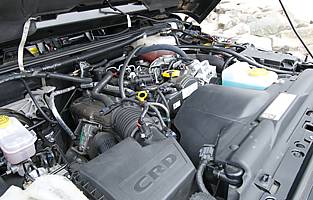 As one of the most recognisable 4x4 vehicles ever produced, Jeep's Wrangler has proven to be a hardly, tough ad popular choice in the small but important hardcore 4x4 sector. It's rarely felt bag up to date in terms of creature comforts and on-road performance, although this revised model aims to redress the balance.

For all the company's consumer-orientated and luxury models, the Jeep brand lives on in its most pure form in the shape of the Wrangler. The clear visual link between it and the original 1940s Jeep is undeniable, and the Wrangler has a strong following all over the world. Over time subtle revisions have maintained the vehicle's relevance, but this revamp boasts a noticeable improvement to both the driving an ownership experience.

In the face of more lifestyle-oriented rivals, this Wrangler receives a generous equipment upgrade, which brings it much closer to the competing 'soft-roader' competition. The revision programme is a thorough one, with the use of better quality plastics, tweaks to the 4x4's mechanicals and the inclusion of a cleaner and better performing diesel engine.

And mechanically this Wrangler is built to tackle the really rough stuff. The four-wheel drive system has three operating modes, with two-wheel drive for most on-road conditions, with high range and low range four-wheel drive available by shifting a secondary lever in the cabin.

The Wrangler is also constructed for serious off-road use, with a separate 'ladder' chassis design, rather than the unitary construction that is common on most cars. This allows greater articulation for the suspension, giving the Wrangler superior climbing ability and reducing the likelihood of grounding in extreme conditions.

Our verdict on the Jeep Wrangler 2.8 CRD Sahara 2dr

Fans can breath easy in the knowledge that Jeep has done the right thing and updated its iconic Wrangler in all the important areas. It's diesel engine is solid performer, while the cabin environment is much improved and ensures driver fatigue has been reduced along with a boost in comfort levels. The Wrangler remains a niche product amongst the soft-roader community, but it's now better equipped for the demands of the 21st century.

Despite the inclusion of a reworked diesel engine, 4x4s like the Wrangler can't match the economy and emissions performance of a regular family car. If you plan on regularly towing or off-roading expect fuel consumption to take a hit, too. Elsewhere, expect big car costs such as servicing as the Wrangler is a little more complex than your average supermini.

Space for front seat passengers is relatively good, while in the rear headroom and legroom is more restricted. With the rear seats in place the boot is small, although in terms of practicality the Wrangler is a success, thanks to features like the hose-down interior, drainage plugs in the floor and removable carpets.

The clear and simple layout of the Wrangler's cabin fits well with the car's simple approach to off-roading. The past 'no frills' design has been replaced by a more modern layout reflecting the vehicle's dual role as a lifestyle model. The few dials and controls are easy to understand, while the audio unit and optional sat-nav function are pleasingly intuitive.

There's no escaping the diesel engine - it's a vocal component of the Wrangler especially when travelling at speed. That said, ride quality is reasonable for such a hardcore 4x4, and its supportive seats help make long journeys comfortable.

Subtle security measures are present - locking wheel nuts, for example - along with the usual immobiliser and central locking. Such vehicles have always been popular with thieves, making the use of a visible steering lock or even a tracking device a sound investment.

Don't expect all the latest electronic aids that you'd see on a conventional family car - the Wrangler is a very different beast. You will get a sufficient quantity of airbags and, don't forget, the car's all-wheel drive system isn't useful just for muddy slopes.

There's no doubt that the high driving position is a boon in traffic, allowing a good view of the road ahead. The 2.8-litre diesel engine provides good torque, although acceleration feels more relaxed than something from a regular family hatchback. The manual six-speed gearbox is slow shifting but positive, although the biggest issue is the steering, which lacks feel and is and low geared, requiring plenty of inputs on the road. Off-road the Wrangler comes into its own, with impressive climbing ability and grip.

With seating for four - just, the two-door Wrangler could perform family duties. motoring. However, with the rear seats occupied boot space is restricted, reducing its ability to cope with a full sized family. The relative lack of comfort may also restrict the Wrangler's usefulness as a family car, making a conventional hatchback or even a 'soft-roader' a safer choice.

From the outside it's easy to see the Wrangler's appeal, but its vague steering and poor maneuverability would make it quite a handful for an inexperienced driver.

Like land Rover's Defender, Jeep's Wrangler enjoys a cult following. Off-roading fans having nothing but praise for is abilities, while this version's various improvements makes it more useable on Tarmac. The revamp has also boosted cabin quality levels - a sticking point for some prospective buyers.

Accessing the Wrangler's cabin is slightly more difficult than a regular car, thanks to the high ride height and floor. The short doors open wide, while access to the rear seats requires the front chairs to be folded forward.

A CD player and radio tuner is fitted as standard, while there's the option of a more sophisticated combined audio and sat-nav unit. Either way, the unit is located high up in the fascia, which makes operating it easy.

Jeep offers a choice of refreshingly bold exterior colours, which do much to boost the vehicle's appeal and flatter its otherwise boxy styling. Inside, the cabin revamp has resulted in a lot of black plastic, but it looks durable.

The Wrangler boasts good forward visibility thanks to its upright stance and lofty seating position, making it easy to place on the road. The view rearwards is less good thanks to the car's thick window pillars. And although it has power steering, the amount of lock available is poor, requiring a lot of effort from the driver when it tight parking spaces.

Full size spare wheel is mounted on the exterior of the tailgate.

Suzuki Jimny Much smaller, but cheaper and solidly built