Dramatic appearance is a mix of style and purpose 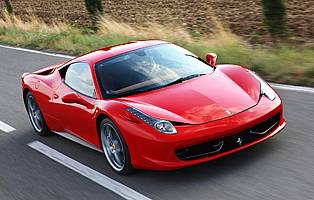 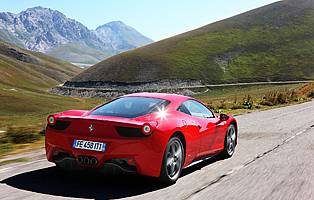 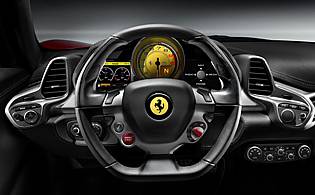 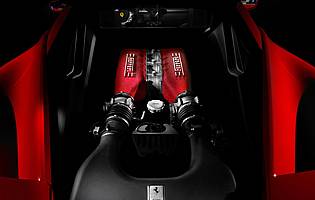 Any new Ferrari is greeted with huge enthusiasm from potential buyers and enthusiasts too, but the 'entry-level' model in the range holds a special draw as it represents the dream that is most obtainable. The 458 Italia is the latest in a long line of V8 coupes that often provides the purest Ferrari experience.

In a range of mainstream cars the entry-level model is rarely something to be excited about, but Ferrari is anything but a mainstream manufacturer. For decades there has been an eight-cylinder, two-seat coupe model in the Ferrari line up and it has almost always been the most popular model in terms of sales. There have been some near-misses along the way too: the 348 and 360 were flawed gems, but the outgoing F430 was a scintillating sports car.

The 458 Italia aims to move the excitement still further but with a greater emphasis on everyday usability, something which has not been necessarily associated with the brand in the past. From the outside the 458 is an arresting site and clearly blends drama with the need for effective aerodynamics, with a prominent diffuser and even moveable winglets in the front air intakes - linking the 458 with Ferrari's Formula 1 cars.

Its mechanical make-up also follows a familiar pattern, again linked to the firm's motorsport programme. A direct-injection petrol V8 engine is mid-mounted, behind the two seats and sends drive to the rear wheels only via a seven-speed dual clutch transmission. The 458 also includes a wide selection of electronic performance and safety aids, largely controlled by the manettino switch located on the steering wheel.

Perhaps surprisingly for a Ferrari there is a greater emphasis on the comfort of its occupants and the ease of everyday use. An automatic handbrake is a useful addition, there are more controls located on or around the steering wheel and the slick operation of the gearbox in full automatic mode can make short work of even

Our verdict on the Ferrari 458 Italia F1

Rather than being crushed by the weight of expectation, even a short drive in the 458 Italia reveals a supercar of the highest order with all the power, panache and presence that a buyer could wish for. That it is calm and controlled when driven with restraint is all the more remarkable given the incredible sensory overload it can deliver when in full flight.

There's not much in the way of good news here. After the purchase price, the options list is long and expensive, vehicle excise duty and insurance are also inevitably high. The one saving grace is that the efficient auto transmission and direct injection engine can manage a respectable combined fuel consumption figure, but hardly any owners will want to drive it in such a way.

Another surprise when you climb aboard is that the 458 feels relatively spacious. By mounting many of the controls on pods around the steering wheel it leaves more space around the legs, increasing the sense of room. The luggage space is under the front bonnet and is big enough for two large soft bags, with additional space behind the seats.

The 458 has quite an unusual control layout, with indicators, lights and wiper switches all mounted on the steering wheel. They take some acclimatisation, the indicators in particular, and occasional inconsistencies in their self-cancelling can be frustrating, but on balance the result is an uncluttered feel that works well.

It's hard to imagine that a road racer like this can be remotely comfortable, but switch it back to Comfort mode and put the transmission in automatic and at times you can forget this is a 200mph Ferrari. The softer of the two suspension settings helps to soak up bumps although you are never in any doubt of their existence, and noise levels are very well managed.

A car like this needs a high standard of security, and the standard fit alarm, immobiliser and vehicle tracking system are entirely appropriate.

The 458 is built upon a very strong structure with plenty of carbon fibre, is packed with a multitude of electronic aids and at a very simple level has enormous reserves of grip, performance and braking power.

It comes as no surprise to learn that the 458 is capable of delivering immense thrills. Even with the manettino switched onto the most comfortable setting, the response of the controls and the tautness of the suspension indicates its capabilities. On the right road simply switch the manettino to Sport or Race and it feels tighter still, the exhaust opens to allow the full roar of the engine and the transmission shifts even more quickly. A full-throttle burst of acceleration is a devastating combination of noise and speed, matched only by the might of the carbon fibre brakes and the balance of the superb chassis through the bends.

A child's car seat will fit in the 458, but unless you are a two-person family the 458 simply can't do the job.

As much as any keen new driver would want to experience the thrill of a Ferrari, the 458 Italia is entirely inappropriate for a new driver, never mind the scant prospects of getting appropriate insurance.

Despite the peerless brand image, quality hasn't always been its strongest suit. However, the 458 Italia feels like a quality item throughout and unlike some of its predecessors, the cabin feels sturdy enough to last for many years without trouble. Image-wise the 458 Italia has arguably the best in the business, with the instant cache of the Prancing Horse, amazing back catalogue and motorsport success.

The single door on each side is long and opens wide, so although the car's lack of height means it is a drop down into the seat, as long as the door is opened sufficiently this presents no problems. Pull up too close to the petrol pump at a filling station however and you have an undignified squeeze through the door aperture.

The upgraded audio system is a must as it includes Bluetooth phone connectivity, and although it is a pricey option it results in very impressive sound quality and easy access to telephone functions. That said, the 458 itself is capable of producing a spectacular soundtrack.

Perhaps unusually for a Ferrari, it looks good in both the traditional red and more unconventional colours: the bright pearlescent yellow or contrasting black both suit the complex curves. On the inside the trim is certainly a further step forward, and while it will not be the best trim available in a car of this price it at least feels of sufficient quality.

Putting a car like this into a space can be a fraught experience at the best of times, but in its favour the 458 has decent visibility and light power steering at low speeds. Rear parking sensors are a must however, and are a cost option.