Discover this year's best places to eat, stay and drink 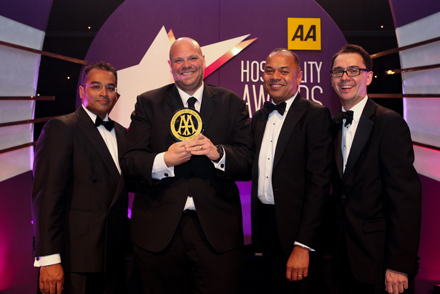 Tom Kerridge received nationwide recognition at the AA Hospitality Awards 2013–2014 where he was named AA Chefs’ Chef of the Year.

Sponsored by Caterer.com, the ceremony was hosted by Krishnan Guru-Murthy at the London Hilton on Park Lane.

Chefs' Chef of the Year Award

Renowned chef Tom Kerridge was celebrating at the Hospitality Awards after not only seeing his restaurant The Hand and Flowers receiving four AA Rosettes but also winning the coveted AA Chefs’ Chef Award at the AA Hospitality Awards 2013.

The Chefs’ Chef Award, sponsored by Caterer.com, is a unique award that offers all AA Rosette-awarded chefs the chance to decide which of their peers deserves the ultimate recognition.

Simon Numphud, AA Hotel Services Manager said, “I am delighted to see Tom being recognised by his peers for this very special award, a culmination of eight years hard work establishing the Hand and Flowers as a leading culinary destination. He is always very humble in all the success he has achieved, totally passionate about food and a superb chef”.

More on The Hand & Flowers

The award recognises professionals within the hospitality industry who have committed their lives to the pursuit of perfection within their discipline. Winners of this award are to be congratulated for making significant fundamental contributions to the industry which have had a notable impact, and must have demonstrated a lifetime commitment to progress in their field. 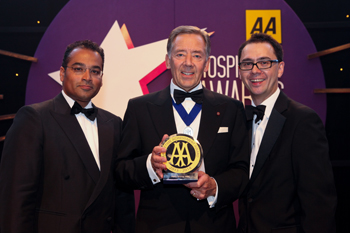 Harry Murray has been in the hotel industry for over five decades with roles in England and South Africa including general manager at the North Stafford Hotel in Stoke-on-Trent and the Majestic Hotel in Harrogate.  He then headed to South Africa to head the President, and then the Landdrost hotels in Johannesburg. Returning to the UK he was general manager at the Imperial Hotel, Torquay, before returning to South Africa, this time to open the InterContinental in Cape Town.

He returned again to the UK and took up his role at Lucknam Park where he oversaw the multimillion pound refurbishment creating was he describes as the ‘best hotel spa in the country’.

AA Hotel of the Year 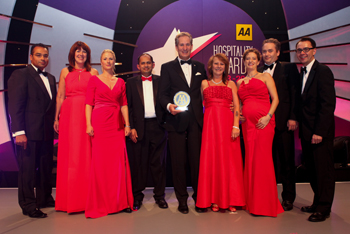 Built in 1598, Gravetye Manor is one of the foremost country house hotels in the country.  Guest will not only find world famous gardens but history and luxury in equal measure.  After falling on hard times, the last three years has seen the new owners return Gravetye restored to its former glory.  It is firmly in the 21st Century without losing a shred of its character and originality. 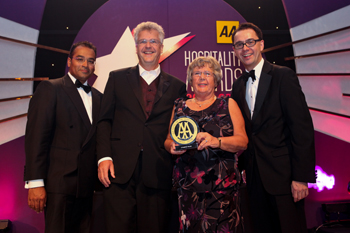 This romantic baronial mansion, built in 1861, is set in 28 acres of beautiful gardens and woodland.  Guests can enjoy the walled garden with its 400 year old yew hedge, a waterfall, sculptures and croquet lawn. 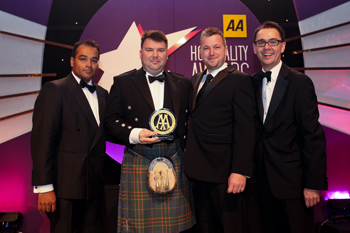 Llangoed Hall is set against the stunning backdrop of the Black Mountains and the Wye Valley.  It is an imposing country house which is a haven of peace and quiet.  Llangoed Hall has also been awarded 4 AA Red Stars. 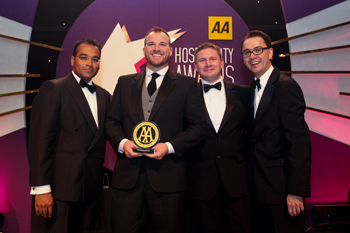 This magnificent Grade 1 hotel situated in the historical Cathedral Quarter of the city centre has been lovingly and sensitively restored to reveal its original architectural grandeur and interior opulence.  In 2010 a further 36 rooms were added to the existing 26 as well as a luxury spa, rooftop gymnasium, a dedicated meetings and events floor and a jazz bar.  It is now Belfast’s only AA five star rated hotel.

More on The Merchant Hotel 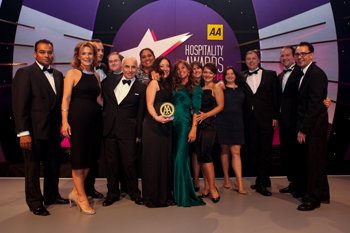 Discreetly tucked away in St James’s DUKES is over 100 years old.  Steeped in history, its style is understated with smart, well-equipped bedrooms and public areas.
Deborah Dhugga, General Manager of DUKES said, “It is an honour to be recognised in the industry by the AA.  I am moved about picking up this award for the team they all work so hard, this award belongs to the Dukes Team.”

AA Restaurant of the Year 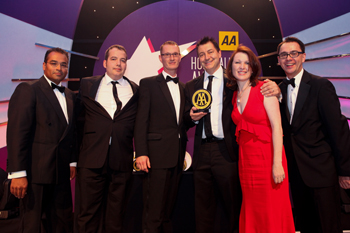 Husband and wife team Laurie and Jacqueline Gear opened the restaurant in 2002.  However they were forced to shut following a fire in a neighbouring premise in 2008 but when The Artichoke reopened 18 months later it quickly got back to form.  Positioned in the market square of the lovely town the Grade 2 listed building retains many of the original features.  Chef Laurie’s cooking shows bags of ambition which is matched by his culinary skills.

More on The Artichoke 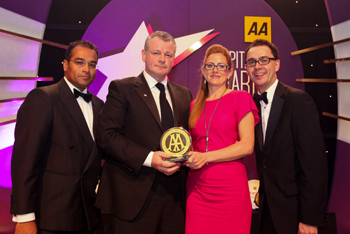 Ondine opened in September 2009 with a commitment to great tasting, sustainable seafood. Ondine’s central horseshoe shaped crustacean bar is both a feature of this restaurant and a declaration of intent – this place is about top notch Scottish seafood dished created by Chef Roy Brett. 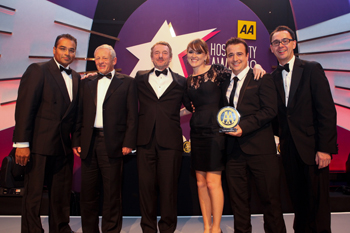 History seeps from the pores of the originally 15th Century inn in the shadow of Beaumaris Castle.  Its flagship dining room is The Loft where chef Hefin Roberts produces imaginatively worked, modern British dishes which are comprised of a multiplicity of premium Welsh ingredients.  The Loft has also been awarded three AA Rosettes. 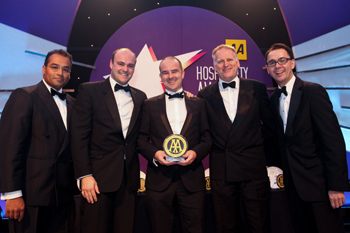 Medlar, which opened in the Kings Road, Chelsea in April 2011, is the first restaurant venture of owners Joe Mercer Nairne and David O’Connor.  Their aim is to provide fantastic food at a reasonable price and to deliver a very high standard of customer service in a relaxed environment. Their combined experience in some of London’s best restaurants is certainly helping them to achieve their aims. 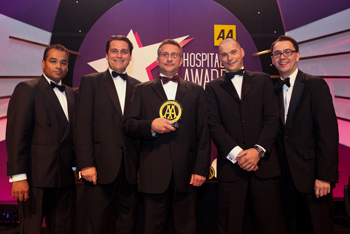 The newest of the AA Hospitality Awards, the AA Food Service Award recognises establishments who not only deliver excellent standards of restaurant service and hospitality but also have technical service skills, food and beverage knowledge of the highest standard and a clear commitment to staff training and development.

More on The Waterside Inn 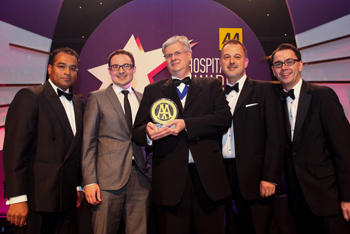 Northcote has a beautifully presented wine list overseen by Head Sommelier Adam Pawlowski, which has quality selections throughout. There are well chosen wines by the glass and it is great to see areas such as Portugal being championed.

Scotland & Overall: The Witchery by the Castle, Edinburgh 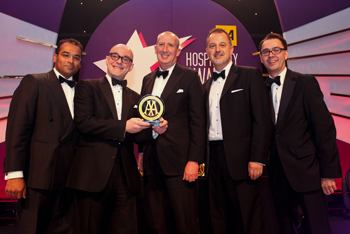 At The Witchery guests will find a superb list which keeps their interest throughout.  With clear strength and depth, the wines have been expertly chosen. The great pricing policy ensures good value at all levels, together with intelligent tasting notes.

More on The Witchery by the Castle 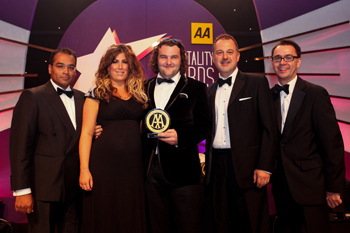 At Park House a clear passion and commitment to wine is very evident in their wine list with some great depth in vintages. The larger formats listing, Australian range and champagnes listing are impressive.

AA Pub of the Year 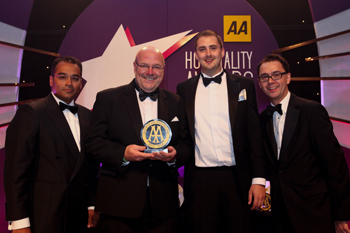 The newly refurbished Elveden Inn reopened in November 2011 to reveal a relaxed and contemporary bar and dinning rooms.  Guests can expect a family-friendly atmosphere, blazing log fires in winter, East Anglian Ales on tap and a modern pub menu that brims with local produce. 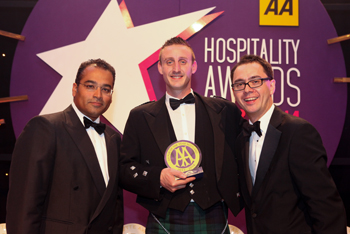 The Sheep Heid Inn, dating back to 1360, is the oldest surviving public house in Scotland.  After a fantastic refurbishment it is now known for delivering outstanding food in a comfortable and warm atmosphere making the Sheep Heid one of the most desirable places to dine in Edinburgh.

More on The Sheep Heid Inn 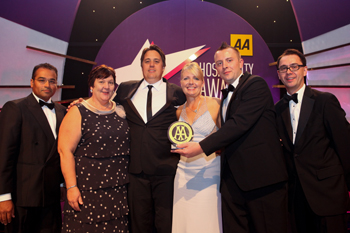 As the first licensed house in Wales this charming, creeper-clad inn has been welcoming customers since 1573.  With stunning views of the River Conwy this pub offers a distinctly Welsh tilt to the menu with lamb and game from nearby estates and an infinitely varied selection of fruits of the sea brought in through Conwy’s quay or Anglesey’s boats.  The beers mostly come from the Great Orme micro-brewery.

More on The Groes Inn 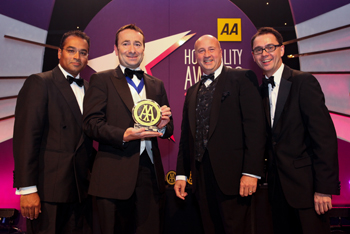 AA Hotel Group of the Year 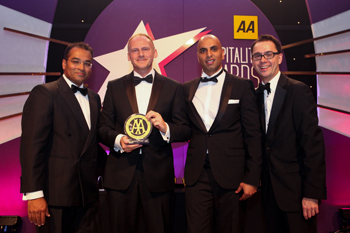 Established in 1990 by Donald Macdonald and colleagues, Macdonald Hotels and Resorts have steadily and successfully expanded from its beginnings in the Scottish Highlands to become the UK’s largest privately owned hotel group.  With over 45 hotels across the UK and ten resorts throughout the UK and Spain, Macdonald Hotels and Resorts continues to invest and remains focused on delivering exceptional hospitality. 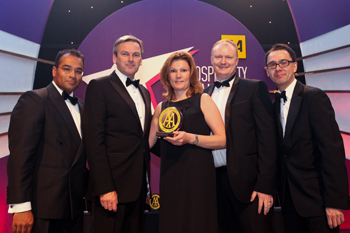 By introducing PLANET 21, Accor has made 21 commitments in favour of sustainable development.  These cover the areas of health, nature, carbon, innovation, local development, employment and dialogue.  The 21 commitments include offering eco-friendly products, fitting flow regulators to taps and showers and the use of energy monitors.

AA Eco Hotel of the Year 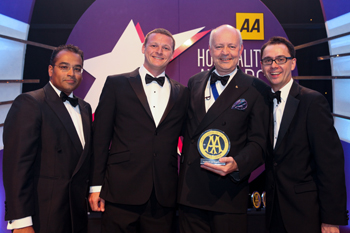 Le Manoir has shown a commitment to the environment by setting up its eco-brigade (Custodians of Responsible Luxury). The brigade is made up of employees with a passion for all things green. There are 17 internal members and one honouree guest, and all departments are involved. The brigade meets monthly and minutes are written, recorded and distributed to all employees.
More on Le Manoir aux Quat'Saisons 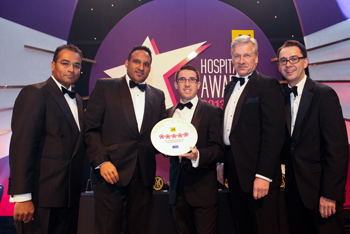 Andrew and Christina Brownsword used to visit as guests and Gidleigh Park has always been a special place for them. In 2005, they purchased the property and became its ‘custodians’. Gidleigh remains the jewel in executive chef Michael Caines’ crown, the place where his culinary philosophy finds its most eloquent expression. In a suite of three interlinked dining rooms panelled in oak and decorated with good-humoured lithographs, the scene is one of understated formality. 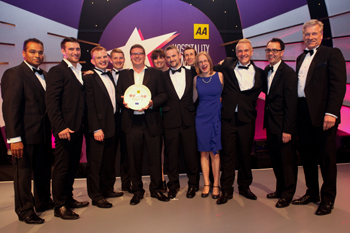 The setting is idyllic: on the edge of Midsummer Common, with cattle grazing on the lush green grass, and the River Cam flowing by, the Victorian villa sits in a beautiful, countrified spot which makes it hard to believe you’re still within the city boundary.

It’s been a restaurant for many years, run since 1998 by chef Daniel Clifford, who’s worked tirelessly and with unwavering energy and enthusiasm in that time to put Midsummer House well and truly on the gastronomic map. 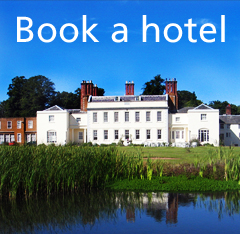